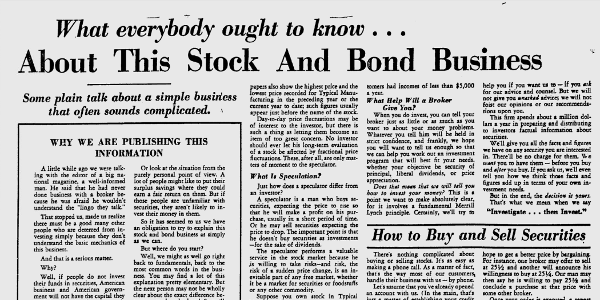 The advertisement placed in newspapers, including the New York Times, by Merrill Lynch

There is a little-known story of how one promotion propelled a business that today manages US$1.4tn in client assets.

On October 19, 1948, Merrill Lynch published a 6,450-word ad in the New York Times. It cost the company about $5,000 to run the ad, a risk that an employee called Louis Engel had convinced his bosses was worth it.

The ad had no explicit references to the brokerage firm and was blandly titled: What Everybody Ought to Know About This Stock and Bond Business.

At the bottom-right corner of the page was a little call to action that acknowledged Merrill Lynch as the sponsor and invited the reader to request free reprints of the ad in pamphlet form.

Engel had been at the firm for only two years, and his proposal had given his superiors two major concerns: First, such free information and education was sure to benefit their rivals. Second, why would anyone respond to getting a pamphlet of something they could simply tear out of the paper?

Before I share the results with you, it’s important to note that Merrill Lynch first tested this concept in a smaller publication in Cleveland. Testing is important before you invest heavily in any campaign or promotion.

Back to the story. The Cleveland experiment had encouraging results, and the company went ahead in the New York Times. Following the publication of the ad, Merrill Lynch received more than six thousand requests from potential customers.

The company also received hundreds of letters from appreciative readers, saying things like, “God bless Merrill Lynch – I have been wanting to know this all my life.” The firm ran the same promotion, or slightly edited versions, in newspapers across the country for the next few months and years.

They are said to have received over three million responses, which translated into many customers. You can imagine the impact this had on their business.

In the ’60s and ’70s, advertising agency Ogilvy & Mather used the idea to create 17 ads for their business. Again, these ads were wordy, with titles like, How to Create Advertising that Sells.

The key to using a strategy like this to increase your market share is to focus on educating your market better than any competitor can. The better advised a person feels by you, the more likely they are to see you as an expert.

Merrill Lynch’s concern about the ad benefitting its rivals was misplaced. Readers saw them as knowing the most about the subject; understanding the needs of, and how to talk to, its customers; and willing to take the time to make sure that those potential customers were well-informed.

It’s a strategy that is still worth trying today.

Jeffrey Manu is an entrepreneur and marketing strategist. He founded Growingstartup.com and builds marketing systems and advertising campaigns for business owners. He also runs STEM-based boot camps for African youth.