Leslie Maasdorp is the president for Southern Africa at Bank of America Merrill Lynch. In a recent panel discussion, Maasdorp highlighted some of the problems Africa needs to address in order to unlock further growth and opportunities. 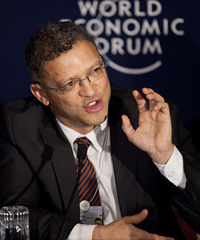 “Most of my colleagues now refer to Africa as the ‘opportunity’, if you like, but I think it’s important for us to begin to talk in a little bit more detail about what are some of the levers that could unlock even greater potential. And when I look at the continent I would say one of the key blockages for further economic growth is power. The total installed capacity of electricity, power capacity, on the continent (sub-Saharan Africa) is about 68,000 MW. That is the equivalent… of one country on the European continent – and gives you a sense of the distance we still have to travel as Africa.”

Maasdorp said one of the main limitations to power generation is the lack of harmonious regulatory frameworks across governments in Africa. “There is significant hydropower on the continent. For example, I think something like 90% of the hydropower potential is unexploited in Africa. If we could get a number of governments to collaborate – for example around Inga if you look at the DRC – we could power most of sub-Saharan Africa. So one of the real challenges is that we haven’t managed to work across jurisdictions; each country, each sovereign unit, functions on its own. So harmonisation of policy and regulatory framework is a big and major stumbling block still.”

“The second [problem] I would say is just broadly infrastructure. I mean to move goods between countries, trade, is incredibly costly – the consequence of lack of rail infrastructure, ports inefficiencies, and so on. So the second in my view is really the upgrading of infrastructure of all types. Then the third area I would say is skills. We have a significant skills shortage, not only in this country, in South Africa, but on the rest of the continent.”

Maasdorp said that Africa’s GDP is predicted to continue to grow, opening a number of opportunities for businesses and investors. However, he pointed out that economic metrics can often be misleading without taking other factors into account. “Simply looking at economic statistics is not very helpful. In fact in the early 1960s Africa also experienced a spurt of growth but that quickly sort of fizzled out as a lot of these countries embarked on some rather short-sighted policies, for example, nationalising mines in the case of Zambia.”

Maasdorp, who has been an advisor to US-based firms like Goldman Sachs in the past, said that skills and technology need to improve on the continent in order to catch the attention of American multinational companies. “Historically the continent has been a very important destination for US investors. It remains so but there are a number of areas where African economies have not developed up the value chain. For example, we contribute only 1% to global manufacturing… it’s impossible for a large hi-tech US firm to establish unless the skills and technology exists here.”

However, Maasdorp believes that Africa remains important to the US economy mostly for natural resources. “After the Walmart deal… you haven’t seen another big ticket [investment] yet [from the US]. But the significant investments, which I think is going to happen over the next number of years, will be in the oil and gas sector. You might know that there have been significant new natural gas discoveries off Mozambique, Tanzania, Uganda, the entire East African block, and I think you are going to see significant US multinationals moving in there,” added Maasdorp. “So resources will continue to dominate the focus of the US companies, but we have to ensure that we begin to move into the more value added sectors such as manufacturing.”