Africa’s growing middle class and increasing consumer spending power have been the motivation behind many investment decisions over the past years. 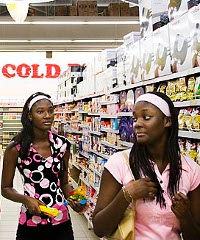 Although the African middle class is growing, spending power on the continent remains relatively low.

The often cited figure on the size of Africa’s middle class is one from a 2011 African Development Bank (AfDB) report that defined the middle class as those with daily consumption of US$2-$20. According to the AfDB, in 2010 the African middle class accounted for 34% of the population, nearly 350 million people.

Many commentators have, however, conveniently ignored that the AfDB divided Africa’s middle class into three sub-categories. At the bottom end is what the AfDB calls the “floating class”. These people spend $2-$4 a day, and can easily slip back into poverty. About 60% of the middle class fell into this category.

The World Bank’s definition of a middle class consumer is someone earning between $2 and $13 per day.

A recent report by professional services firm Ernst & Young questions the appropriateness of these income ranges used by the AfDB and the World Bank. “Both of these income ranges are problematic for businesses operating in the developed world. Can somebody earning the equivalent of only $2 per day really be considered middle class? Two-thirds of the AfDB’s middle class earned between $2–$4 per day. In any developed country, an income this low would be well below the poverty line.”

The report notes that although the World Bank’s definition is a useful measure for how many people have been lifted out of poverty, someone earning $2 a day is not likely to be able to afford consumer goods such as washing machines and televisions.

Ernst & Young says that for most businesses, a more useful definition of middle class is people earning between $10 and $100 per day. “People in this income bracket can be considered a ‘global middle class’ – middle class by the standards of any country.”

David Cowan, a senior economist for Africa at financial services group Citi, last year wrote that the more widely accepted definition of an emerging market middle class consumer is someone earning at least $13.70 per day. “It is at this level and above that people really increase their purchasing of large consumer durables, notably autos and houses.”

Cowan said that this doesn’t mean Africa’s consumer story has no legs, only that it should be better understood. “We think that at least in the coming decade or so, the key consumer markets in sub-Saharan Africa will largely be low-end, with a splash of high-end colour … While there can be talk of an emerging middle class, we think it is much more logical to talk about the emergence of a new consumer market in sub-Saharan Africa. This new consumer will, for all extents and purposes, largely consume basic goods and services for the next decade or so, assuming that the overall sub-Saharan Africa growth trend remains robust.”

Debates about the definition of middle class are not unique to Africa. Ernst & Young’s report notes that depending on the standards used, the size of India’s current middle class ranges from 30 million to 300 million.