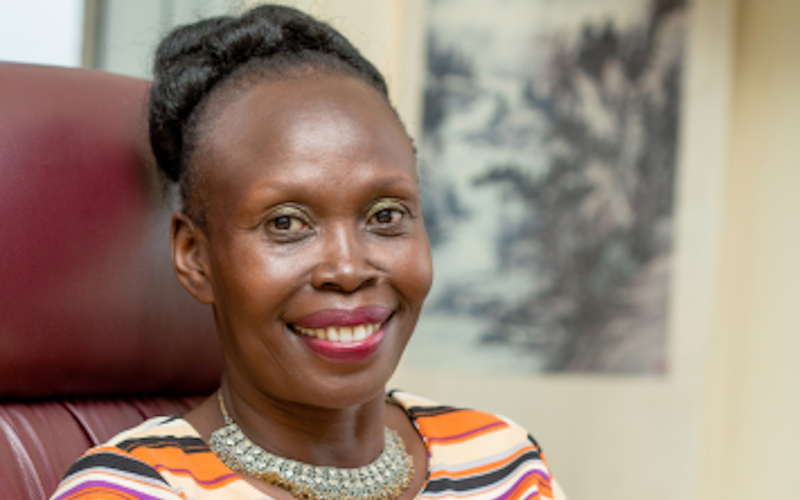 In 2004, Josephine Okot requested a loan from a commercial bank in Uganda to start her business. She had a house to offer as collateral and an idea to build a company that would produce high quality seeds to rural farmers to improve their crop yields.

“The bank actually shut the door in my face,” she says. “They told me I don’t have a business history and they cannot run such a risk. They were not going to give me any money.”

Seven years later, Okot, founder and managing director of Victoria Seeds, was approached by the same bank to serve on its board. She graciously accepted.

Access to finance was only one of the challenges Okot had to overcome to build her company, which currently has an asset value of 14.4 billion Ugandan shillings ($3.89 million).

After graduation Okot first worked for the Uganda Tea Authority and then for a private company trading in seed. When she quit to start Victoria Seeds, most of her family and friends actively discouraged her.

“Everyone said I was out of my mind. They said business is a male-dominated area and that the private seed industry hardly existed in Uganda,” she remembers.

Okot made the decision to ignore the naysayers. The name Victoria Seeds was chosen to entrench this belief in herself. “I named it after the largest body of water on the continent. I felt it showed that I will always be here. In the early years it gave me the confidence every day to wake up and say: ‘I am not going anywhere.'”

Okot grew up in conflict-ravaged northern Uganda. Her father, an engineer, died when she was six years old and her mother was left to raise the children. She remembers these times as difficult, noting that most of her friends also lost their fathers, with their mothers struggling to make ends meet. Many of these households depended on agriculture for their livelihoods and Okot wanted to one day make a difference in the lives of smallholder farmers in the same position.

In her last job before founding Victoria Seeds, Okot became actively involved in work to harmonise seed policies and laws in East Africa. This work was championed by the Association for Strengthening Agricultural Research in Eastern and Central Africa (Asareca) and the relationships built through this forum would serve as a source of valuable network capital later in her career.

During this time, she noted that farmers often had lower crop yields than the yields achieved when the same seed varieties were tested in performance trials. She believed the problem was partly rooted in poor extension services (the provision of information and advice to farmers) and a shortage of crop protection products.

Victoria Seeds was her answer to boosting the crop yields of farmers.

To establish her business, the first step was to procure premises where seed from contract growers could be cleaned and treated (seed conditioning). The landlord she approached was sceptical and refused to give Okot a rental agreement. He promised that if she could survive the first three months, he would put one in place. Okot not only survived, she build a company that would, some years later, employ that landlord’s daughter.

When the first visit to the bank failed, Okot turned to USAID, which offered a loan guarantee she could take back to the bank. That, along with her house, resulted in a commercial loan of around $100,000. It wasn’t much, but it was enough startup capital to put everything in motion for her very first contract, secured through her Asareca contacts, to produce and supply sorghum seed from Uganda to a buyer in Tanzania. With a team of five, Victoria Seeds started operations.

To deliver on this contract, the company contracted farmers to grow and harvest the seed, which would then be cleaned and conditioned at Victoria Seeds’ factory. Today the company has three seed factories across Uganda.

Growth levers and standing out from the competition

Okot says Victoria Seeds differentiated itself from the competition by ensuring the best quality seeds, firstly, and by offering rural farmers products in packaging tailor-made for this market.

To achieve the highest quality, Victoria Seeds supervised its contracted growers to ensure the different seed varieties were appropriately isolated. This way they produced genetically pure seeds that delivered optimal yields once sold on to the end users. The same stringent controls were also applied in the factories where the seeds are conditioned, to ensure the treatments used came from trusted sources.

In terms of packaging, Victoria Seeds understood its market well. “The farmers prefer to be able to see what is in the bag, so we adapted our packaging in this way,” says Okot. Victoria Seeds also sold smaller packs than the competition was offering – 2kg instead of the 5kg or 10kg normally used for field crop seeds (such as maize and sorghum). For vegetable seeds, Victoria Seeds offered 10g sachets.

“We used to load our tuk-tuk, our mobile seed shop, with these packets and sachets and take it to the rural farmer markets. That is how we differentiated ourselves.”

Okot admits the initial growth process was slow. In the beginning, the company only focused on field crop seeds before adding vegetable seeds.

Then, observing that to the detriment of the yield potential of the seeds sold to them by the company, some farmers were using fake chemicals to treat fungal infections and pests, Okot made the strategic decision in 2010 to introduce crop protection products.

Over time the company’s distribution model also changed. In the early years it would take its seeds to rural markets and mostly relied on agro-dealers as its main distribution channel. Now, since the Ugandan government started subsidising seed, farmers apply directly to government and Victoria Seeds then distributes the orders to district government depots. Up to 70% of the company’s current turnover is from sales through the subsidy programme.

Over the years export destinations have come and gone, impacted by instability and volatility in the region. About a month after South Sudan achieved independence in 2011, Victoria Seeds registered in the country. Exports flourished, only to be impeded by the conflicts that flared up barely a year later. Currently the company has an office in Rwanda, but trade has not taken off as Okot would have liked.

“It is difficult to become a large regional or even global player,” she says, listing the cost of finance (often at interest rates between 20% and 25%) as one of the major obstacles.

“Access to working capital is complicated. At that cost you struggle to grow your business, especially with the other risks you also have to overcome in agriculture,” says Okot. “This finance challenge is bigger than me. It has to be addressed at continental level.”

With the spotlight that Covid-19 has cast on food security and the opportunities promised by the African Continental Free Trade Area, Okot believes there will be a drive towards better finance options for entrepreneurs in agriculture.

An opportunity Okot and her team aims to explore is animal feed. “Animal feed in the whole of Eastern Africa, unbelievably, is being imported,” she explains.

At the moment pasture seed is a small component of the company’s sales, but having witnessed how livestock have died during times of drought because farmers can’t afford imported animal feed, Okot believes animal feed and pasture crop seeds offer growth opportunities for Victoria Seeds.