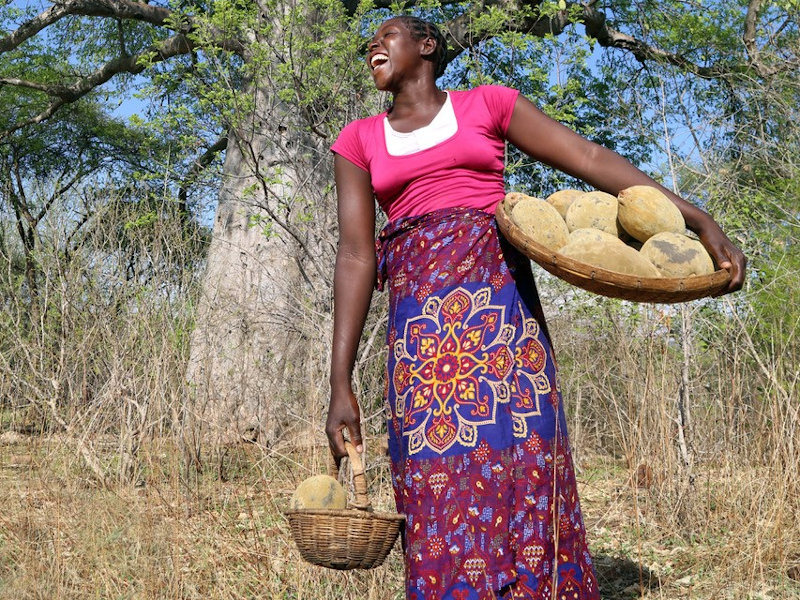 Baobab powder is just one of the products processed from the fruit of the iconic baobab tree, abundantly found in approximately 30 countries in Africa. Before 2008, it was illegal to export baobab powder for sale into the European Union (EU), due to the regulatory approvals not yet in place. It was also not legal to sell it in North America and most parts of Asia.

Under EU regulations, any food not consumed “significantly” in the region prior to May 1997 is considered to be a novel food and applicants who want entry into the market need to provide evidence of safe use in at least one country outside the EU for 25 years.

Thanks to the efforts of a small business association in Southern Africa, Phytotrade Africa, EU novel foods approval for baobab powder was received in 2008. Before this, sizeable local markets existed in parts of Africa such as Sudan and Senegal but export markets were non-existent.

Gus Le Breton was the man who set up Phytotrade Africa. He eventually left the association in 2010 to pursue various business opportunities and is one of the founders of B’Ayoba, a Zimbabwean company that processes baobab into powder and seed oil for export.

“Phytotrade Africa started working on preparing an application to get baobab approved as a novel food in the EU in 2004. The process took us four years in total. That then opened up the window for trade in baobab that now takes place,” Le Breton says. 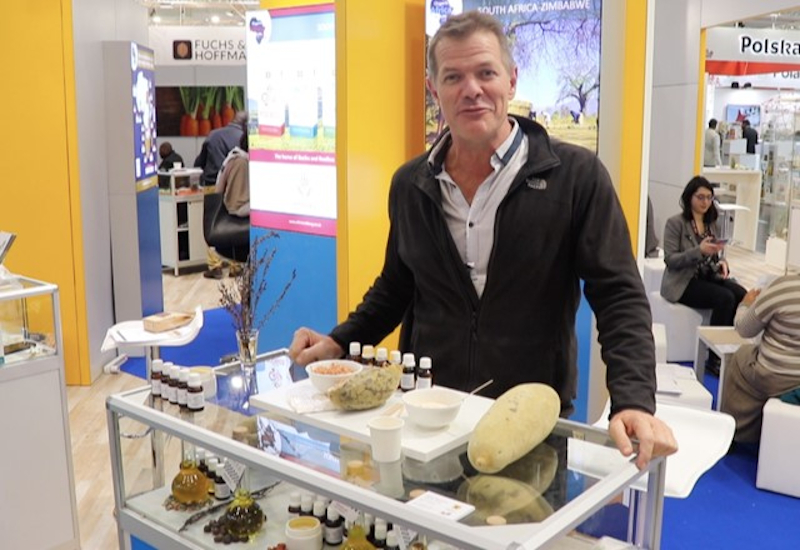 Le Breton and his partner established B’Ayoba in 2012, to “specifically try and turn baobab into a resounding commercial success”. Since then, the market has quadrupled or quintupled in size, he says. “We have definitely made a lot of progress but we are not there yet. It has frustrated me that baobab has not had as rapid a market uptake as I would obviously have liked to have seen.”

According to the Netherlands Enterprise Agency’s Centre for the Promotion of Imports from developing countries (CBI), the European market for baobab ingredients is expected to grow by 4% in the coming years. Other studies put the expected compound annual growth rate (CAGR) at anything between 5.6% (Global Market Insights) to 9.4% (Market Research Future).

B’Ayoba is poised to capitalise on the expected growth. Le Breton hopes the inflection point will come soon.

Processing the fruit into marketable products

Born in Kenya, Le Breton started his career in 1991, working with host communities in Zimbabwe to restore the indigenous woodland negatively impacted by the large refugee populations from Mozambique. He soon realised promoting conservation of natural resources to an impoverished community could be successful only if the people understood the economic value of the resource. In essence, if they could see the cash in hand that would come from conservation.

The biggest threat to indigenous trees and plants all over Southern Africa is the conversion of natural woodland into farmland, says Le Breton. However, in drier areas, people often convert native vegetation into arable land, only to lose the crops to drought. In these areas, where the baobab tree is abundant, the economic value of harvesting the fruit of the tree and selling it to agro-processors such as B’Ayoba makes a clear case for the conservation of the trees.

Baobab is an abundant resource. Le Breton quotes a study undertaken by Bio-Innovation Zimbabwe – another organisation Le Breton founded to promote indigenous plant products in Zimbabwe – which puts the number of baobab trees in Zimbabwe at around five million. Of those, 3.75 million are in communal land and thus potentially accessible and marketable. “A conservative estimate is that we could harvest about 12,000 tonnes of fruit sustainably every year. At present, we are only harvesting 1,500 tonnes annually,” Le Breton says. The global export demand requires just 6,000 tonnes of fruit annually, he adds.

From the fruits, B’Ayoba mills baobab powder and presses seed oil for its customers. Its factory is located on the outskirts of Zimbabwe’s capital Harare. It is the sole producer of organically certified baobab products from Zimbabwe and purchases the fruit from 5,568 local harvesters. The company has 25 permanent employees and this increases to around 150 during the months when the product is processed. At present, 80% of the value to the business is from powder and only 20% from oil.

“It should be that the oil and the powder bring in the same value, even though the volumes are totally different. That isn’t really the case because baobab powder has a much greater relative demand than baobab seed oil. The seed oil is a really expensive product to produce. It therefore comes into the market at a much higher price point and thus the demand is relatively small,” explains Le Breton.

Baobab powder has nearly four times more vitamin C than oranges and has one of the highest antioxidant ratings. The powder also contains several key minerals like potassium, magnesium, iron and zinc. Due to its high nutritional value, the demand from health-conscious markets is growing.

Baobab oil is used as an ingredient in cosmetics and also sold as a stand-alone product for skincare. 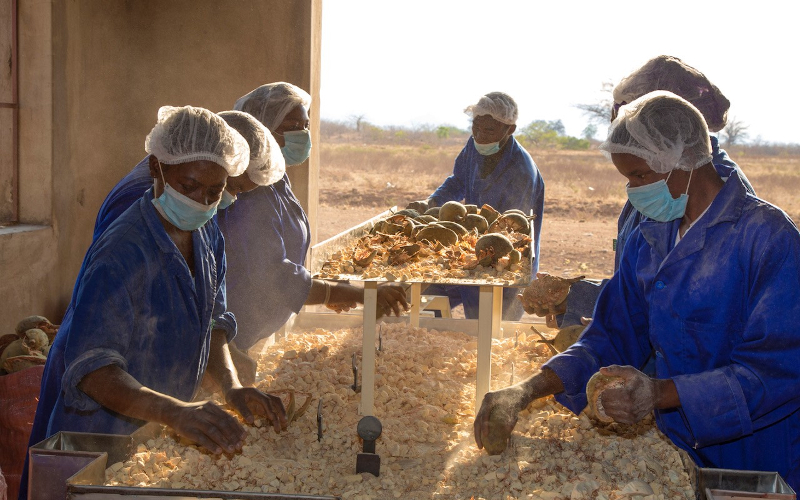 B’Ayoba derives value from all parts of the baobab fruit when processing for powder and oil. The shell, a waste product at the local processing centres where the pulp and seed are extracted, is used to produce compost.

Due to the difference in demand for oil and powder, B’Ayoba often has surplus seed which it uses to plant more baobab trees, raise seedlings for sale and sell to customers who use it for producing animal feed (one customer produces high-protein feed for elephants).

A kilogramme of baobab powder would sell commercially to the end consumer for up to $35, with the oil price much higher at anything between $80 to over $100 per kilogramme. B’Ayoba produces between 100 and 140 tonnes of powder annually.

Le Breton chairs the African Baobab Alliance. According to him, taking baobab through the process for regulatory approval in China is on the organisation’s to-do list.

“Europe has traditionally been the first and largest market for baobab export, possibly because the trade linkages are historically strongest between Africa and Europe.” The North American market also values and appreciates natural health and beauty products and growth in Asia has come from Korea, Japan and Malaysia. “Where there has yet to be any market at all, is China and that’s the big one,” says Le Breton.

Doing business in Zimbabwe is fraught with challenges. Most investors would shy away from betting on the success of a venture based in the country. Le Breton believes a different future is possible.

“Zimbabwe doesn’t deserve the challenges we’ve faced,” he says. “It has been a very tough environment but I have never stopped believing that this country deserves better and will one day become better. The last thing you need is for us as Zimbabweans to give up on it. We shouldn’t even be standing as a country with everything that has gone wrong and is going wrong again today, but we are still here. That is because we are amazingly resilient and phenomenally capable of adapting to the shifting sands of the economic environment.”

“The global wellness revolution, the shift away from synthetic towards natural, is creating demand all across the globe for the types of products that we are producing: organic, natural, wild harvested. We’re only at the beginning of exploring all the opportunities that we have in this nascent natural product sector,” Le Breton adds.

[June 2020] How Ghana’s Catherine Krobo Edusei capitalised on demand for high-end fresh produce
[June 2020] Figuring out how to produce tomato paste in Nigeria: The story of Tomato Jos
[May 2020] Spotting opportunities in Ethiopia: The story of serial entrepreneur Addis Alemayehou
[May 2020] How Kenya’s Wandia Gichuru has tackled the business of fashion
[May 2020] Fish leather shoes: Kenyan entrepreneur finds export market for innovative products