Ghana’s business hub and capital, Accra, has received considerable attention from foreign investors in recent years and has been identified as one of Africa’s top cities for economic growth. 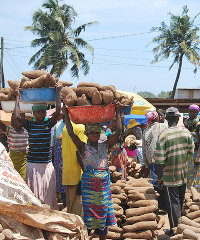 A market in Accra

The MasterCard African Cities Growth Index, for example, identified Accra as having the highest economic growth potential on the continent between 2012 and 2017. The index, released at the beginning of this year, was produced by Professor George Angelopulo of the University of South Africa on behalf of MasterCard.

The cities were ranked according to a number of criteria, including urbanisation, business travel to the area, connectivity, infrastructure, development, governance and economic performance.

According to Angelopulo, some of the reasons for Accra’s high ranking are due to its GDP per capita growth over the past three years, its projected consumption growth, a strong regulatory environment, and the city’s relative ease of doing business compared to other African cities.

“Accra’s overall position is one of high potential and promise. In an international comparison on the same set of measures, the inclusive growth potential of the city appears similar to that of Chongqing in China, and is ahead of both Chennai in India and Jakarta in Indonesia,” revealed MasterCard’s research.

Due to the interest it has received as a business destination, Carlson Rezidor Hotel Group – with brands such as Radisson Blu and Park Inn – has also identified Accra as one of the top 28 African cities with strong potential for hotel expansion.

Ghana has made great strides in terms of its ease of doing business in the past decade. The economy leaped up the World Bank’s Doing Business rankings from 102nd in 2005 to 60th in 2011. In 2013, the country ranked 64th out of 185 countries in the World Bank’s index, making it the fifth easiest country to do business in sub-Saharan Africa.

When international financial consultancy and investment advisory firm, the deVere Group, first decided to venture into West Africa, they chose Ghana as their point of entry. “Just for the ease of a soft landing,” explained Craig Featherby, head of the deVere Group’s Africa operations, in a recent interview with How we made it in Africa.