Companies looking to expand into Africa should seriously consider setting up shop in Accra, Lusaka and Luanda. 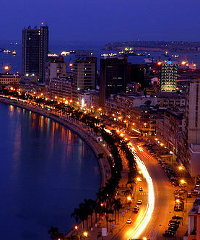 Angola’s capital Luanda is expected to see strong economic growth over the next five years.

This is if the recently released MasterCard African Cities Growth Index is to be believed. The index, produced on behalf of MasterCard by Prof. George Angelopulo of the University of South Africa, includes 19 sub-Saharan African cities, ranking them according to their economic growth potential between 2012 and 2017.

The capitals of Ghana, Zambia and Angola have been identified as the sub-Saharan African cities that have the greatest economic growth potential over the next five years. Sudan’s capital Khartoum is expected to show the lowest growth of all the cities included in the study.

Below are the cities and their ranking:

He said that the reasons for the Ghanaian capital Accra’s high ranking is because of its GDP per capita growth in recent years, its projected consumption growth, a strong regulatory environment, and the relative ease of doing business compared to other African cities.

South Africa’s economic hub Johannesburg is lower on the list as a result of sluggish growth expectation due to its relative maturity when compared with other cities on the continent.

The United Nations estimates that Africa’s urban population will triple by 2050, reaching 1.23 billion people. It is expected that by this time 60% of the continent’s population will live in urban areas.

“One of Africa’s key economic and social challenges is how its cities attract significant inward investment by being globally competitive, serving as magnets for investment and growth, hot-spots of innovation and, most importantly, developing attractive and thriving business environments,” said Angelopulo.

Last year consulting firm McKinsey suggested in a report that cities, not countries, should drive investment decisions in Africa, noting that “most companies are still not looking at cities as they calibrate strategy”. The firm found that “less than one in five executives is making location and resource decisions at the city, rather than the country, level”.

“Companies that understand the shifting urban marketplaces relevant to their businesses and build an early presence with sufficient scale are likely to benefit from being the incumbent with better market access and higher margins. Looking at cities rather than countries can be eye-opening. Take laundry care products as an example. We expect to see more sales growth of these products in São Paulo than in either France or Malaysia over the next decade,” noted the report.