African cities, as opposed to countries, are increasingly becoming the focus for investors looking at entering new markets. For the Carlson Rezidor Hotel Group, with brands such as Radisson Blu and Park Inn, 28 African cities have been identified as having strong potential for their business growth and hotel expansion. 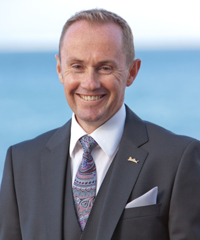 The group currently has 23 hotels open in Africa and 27 under development, across 21 countries. Andrew McLachlan, the group’s vice president of business development for Africa and the Indian Ocean Islands, said that they have also started to focus their attention on emerging towns and cities that are developing around mining or oil and gas discoveries. These ‘boom towns’ are particularly good for their mid-market hotel brand, Park Inn.

“We definitely see that brand going into locations where we actually follow this natural resource growth,” McLachlan told How we made it in Africa. “For instance we opened a Park Inn in Tete in Mozambique in the third quarter of last year and that was primarily following the growth of Tete, where Tete was recorded as being one of the fastest growing towns in Africa. It has one of the largest coal reserves in Africa.”

While the group’s hotel growth strategy – when entering a new country – is to typically open in the capital city and financial hub first, before looking at secondary cities, this was not the case in Mozambique. “And we are looking to do the same type of thing in other parts of Africa where we will have identified where there is a recent finding of new natural resources… where there is no accommodation at all and where you can come in and have a first mover advantage in these new sort of industrial towns.”

Maputo in Mozambique and Addis Ababa in Ethiopia are examples of other cities that are proving to be strong markets for the group. “And then Lagos in Nigeria has obviously been a very strong city for us. Our ramp-up periods have been very, very good and our profit margins have also been exceptional.”

McLachlan said it usually takes a hotel 1,000 days from when it first opens in a market to stabilise, gain a good market share and see good profit margins.

“What is often happening in these emerging African cities is we are getting to a stabilised period within the first six to eight months,” he explained. “So opposed to taking 1,000 days, it’s taking us less than 300 days to get to that same period, and that’s obviously very exciting for us and for our hotel owners in those locations.”

Currently, 80% of the group’s hotels are geared towards business stay and travel in Africa, as opposed to leisure hotels for tourism. Alongside this, they have also noticed a demand for meeting and conference facilities, and a lot of their new hotel development plans have conference facilities included in the design.

“There is huge demand for meeting and conferences to take place in cities… In Kigali [in Rwanda] we will open a Radisson Blu with the largest meeting and conference facility in East Africa… At the moment, in East Africa, people are forced to go to the Nairobi convention centre, which is really quite an old and outdated product, and there isn’t really anywhere else – or anything else – in that region.”