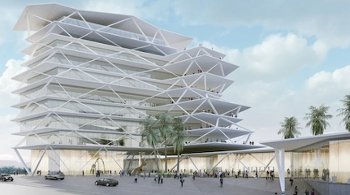 An artist's impression of One Airport Square, a planned mixed-use development in the growing commercial district of Airport City in Accra.

“Within the past decade, the demand for office space has increased substantially throughout Accra … The continued demand for space has been fuelled by the influx of foreign investors and an expansion of the white-collar workforce,” states a recent research report by Broll.

The company notes that Ghana’s new oil industry has led to an increase in the workforce, and as a result the demand for office space has increased as well.

According to Chris Portman from Oxford Economics, the arrival of oil has boosted Ghana’s medium-term growth prospects. Oil output is expected to rise to 250,000 barrels per day over the coming years.

How we made it in Africa recently also identified Ghana’s port city Takoradi as a ‘boom town’ that is expected to see significant growth because of its proximity to the country’s offshore oil fields.

Before Ghana started with full-scale commercial oil production in 2011, Takoradi was described as a sleepy town. However, it has since risen to prominence due to the fact that it is the nearest commercial port to Ghana’s offshore oil industry.

“Takoradi on Ghana’s western coast is dusting off her dance shoes to get ready for the good times. The city has passed its prime and some even say it’s a ghost town. But a promised oil boom means people are blowing new life into Ghana’s main twin city,” the Accra Mail wrote in a 2010 article.

Despite Takoradi’s new-found importance, property developers and retailers have still not fully capitalised on the opportunities.

The situation is, however, changing. Investment firm Renaissance Group announced a new mixed-use urban development, called King City, to be located 10km from the Takoradi harbour. The International Finance Corporation (IFC) has also provided a loan of US$5.45 million to Alliance Estates Limited to build the first Protea Hotel in Takoradi. The 132-room, three-star hotel will help meet demand for business infrastructure as more investors are venturing into the oil producing region of Takoradi.

Economic growth and the entry of multinationals are boosting demand for office space across sub-Saharan Africa.

Private equity firm Actis is also investing in office developments in cities such as Lagos, Accra and Nairobi. “With multinationals coming in for oil, copper, etc. – they need proper offices and that is something where we invest quite a bit of money,” commented Kevin Teeroovengadum, a director for real estate at Actis, in a recent interview with How we made it in Africa.