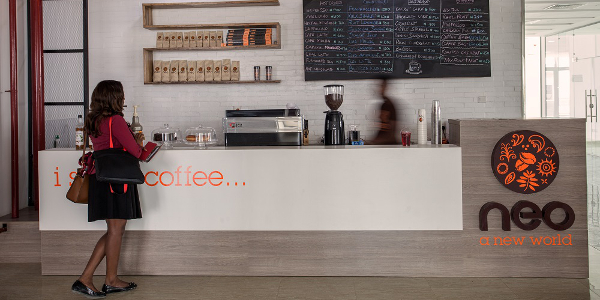 Despite a number of African countries being significant coffee-producers – such as Ethiopia, Rwanda, Côte d’Ivoire, Uganda, Kenya and Tanzania – the vast majority of production is exported to developed nations, with very little consumed on the African continent.

However, a coffee-drinking culture is now emerging in some countries – expats, well-travelled professionals, returning diaspora and young creatives are looking for the same coffee culture they have experienced in developed markets. And Nigerian brothers Ngozi and Chijioke Dozie recognised this a few years ago.

They are the founders of Café Neo, a coffee-shop chain enjoying a first-mover advantage in Lagos. The brand is targeting creatives and entrepreneurs with its free wifi, workspaces, meeting environment, jazz music and – of course – world-class African coffee.

Since its launch in 2012, Café Neo has grown to include seven standalone stores and six office locations in Lagos, as well as a franchise operation in Rwanda. The brothers are now looking at expanding to Ghana and Côte d’Ivoire.

Fired to self hired

Both brothers abandoned corporate careers in the West to pursue opportunities back home. Ngozi, who worked at major financial services firm JPMorgan Chase & Co. as an investment banker, admits to being let go in 2008 for poor performance – after two years of working for the company. “I was just not fit for investment banking,” he notes.

However, he knew he wanted to return home to start his own venture and Chijioke, who had just completed an MBA at Harvard, felt the same.

After researching the market, the duo decided to set up a fund to invest in distressed African companies.

“At that time there was a lot of money running into private equity in Africa, but the opportunity that was being ignored was good companies with bad balance sheets,” explains Ngozi.

“In the West… these companies can just negotiate a bankruptcy package with equity shareholders. But in Nigeria and, for the most part, everywhere else in Africa, there was no bankruptcy or insolvency structure. So you would have good companies that once they had gotten into a bit of trouble, inevitably fall down and die.”

The Dozie brothers managed to raise around US$8m for their fund and it wasn’t long before they found their first distressed company to invest in – a coffee roasting company in Rwanda.

“The rationale was that Rwandan coffee was fantastic quality, and many international buyers were very clear on that,” explains Ngozi.

After turning the company around, they then started looking into exporting to new markets, including their home country Nigeria. However, the brothers soon discovered there were not many places to sell to, and saw potential in starting their own coffee-shop chain.

The first Café Neo launched in 2012 in a small mall in Victoria Island. The location wasn’t very attractive (as the outlet was hidden on the second floor of the building) but the brothers kept it going, despite maybe only getting in around 10 customers a day in the beginning.

About nine months later they managed to secure a counter in an office block tenanted by international companies. According to Ngozi, there were some dedicated customers, but the brand still hadn’t managed to take off.

Then, in 2014, the founders decided to take a risk and open an outlet in a prime, yet expensive, standalone location. And three months after its launch, it began to gain a reputation.

“It was a great success… It wasn’t making money [at first] because the rent was prohibitive, but I think it gave us a lot of encouragement that this could work,” says Ngozi. “And then, in just over 24 months, we got another great location in Victoria Island, which did a lot to create the brand.”

For being one of the first in the market, Café Neo has attracted a lot of media attention. However, Ngozi noted that things have not always been easy. Café Neo was started during a time when the ‘Africa rising’ narrative was frequently used by the media to describe the continent’s potential. But today’s lower oil-price environment has caused many economic challenges for local companies and Ngozi warns aspiring entrepreneurs against getting caught up in media hype and not being prepared for the worst.

“I think one of the biggest mistakes entrepreneurs do is they divorce the macro-economic indices from their micro enterprise. So they go along thinking everything is going to stay great, but then the economic winds change… And that is a mistake we have certainly made and others have as well.”

Today the company is struggling with a weakened naira which makes coffee and machine imports much more costly.

“For example, if we had seen this [naira] devaluation coming, we could have potentially borrowed locally to buy machines, and just stocked up on machines and coffee. We would have saved a lot of money.”

However, Ngozi also believes that the depreciation of the naira might also be a blessing in disguise for Nigerian industries as it forces them to try and cut costs by sourcing locally.

“Even in terms of menu selection, we are now thinking how we can use local fruit and reduce dependence on flour, of which a lot is imported. So in the end I think it’s a good thing.”