For US-born Ian Cox the worst part of being an entrepreneur is to be constantly on the hustle – making sales and ensuring he has enough cash flow to sustain operations. However, he loves the freedom of being able to do what he wants that comes with being his own boss. 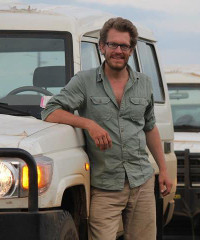 Cox is following a different path to most of his fellow countrymen in that he makes most of his money in South Sudan.

In 2011 South Sudan became the world’s newest country after the region voted in favour of secession from Sudan. The referendum was a core component of the 2005 Comprehensive Peace Agreement that ended decades of conflict between the Sudan People’s Liberation Movement (SPLM) and the Khartoum government.

Cox’s company, Lorry Boys, focuses on the sale and delivery of rugged vehicles. From his base in Kenya’s capital Nairobi, Cox imports vehicles from abroad and then delivers them to his clients in South Sudan.

Following independence many businesspeople flocked to South Sudan. However, the country’s image as a hot investment destination was shattered in mid-December 2013 when many parts descended into chaos after President Salva Kiir accused former vice-president Riek Machar of attempting a coup, leading to intense fighting among supporters of the two leaders.

From the US to South Sudan

Cox first moved to Africa in 1995 after finishing high school. At the time his goal was to do humanitarian work on the continent. “The Rwandan genocide happened in 1994, and that was big enough news to prompt my interest in the continent, and, being an idealistic young person, I wanted to come and ‘make a difference’.”

However, Cox didn’t end up going to Rwanda, deciding rather to settle in Zambia where he worked for a feeding programme.

In the following years Cox regularly travelled back and forth between the US and Africa, before settling permanently in the continent in the early 2000s.

In 2005, just after the peace agreement in Sudan was signed, Cox finished a job at a safari camp in Kenya. He had an interest to do something in South Sudan and, after a bar conversation in Nairobi, he landed a job as a hotel manager in the dusty town of Rumbek, situated in the central part of South Sudan.

After two months at the hotel, Cox realised he could make more money working for himself. So he started trading in satellite phones. At the time mobile networks were almost non-existent in South Sudan, and satellite phones were one of the only forms of communication. He drove his motorcycle up and down the western side of the country, selling the satellite phones off the back of his bike, primarily to members of the Sudan People’s Liberation Army.

He eventually saved up enough money to open an electronics shop in Rumbek, stocking everything from phones to computers. “I was the only guy selling any form of electronics probably for a couple of hundred miles in each direction.”

But business in Rumbek started to dry up. “Most of the NGOs that were operating in South Sudan during the war time or the final years of the war time had their country headquarters in Rumbek. But as time went on, those all sort of shifted out and went to Juba. And after some time the business just sort of dried up there, and there were simultaneously more and more people selling the stuff I was selling.”

At the time he had a large contact list for people operating in South Sudan. When a friend wanted to sell a Toyota Land Cruiser, Cox sent an email to his contacts and sold the vehicle within a few days. This was followed by a request for a quote from a security company that needed a fleet of vehicles. “I won that tender, and then from there I just sort of went straight into the primary business of selling Toyota Land Cruisers and other heavy trucks in South Sudan.”

Buying and selling vehicles wasn’t new to Cox. “When I was in Zambia doing relief work I always dabbled in selling cars on the side. I would order vehicles from Japan, go down to Durban (South Africa), pick them up and bring them up to Zambia… It was just a fun thing I used to do, and it was a pretty natural fit once I started doing it full time.”

Today, Lorry Boys supplies vehicles to a range of clients operating in South Sudan, from organisations like the United Nations to corporates such as Deloitte.

No plans to return home

The current conflict has seen a mass exodus of professionals from South Sudan.

Despite the unrest, Cox expects his company to grow sales this year. “I feel this will probably be a better year than last year because I am involved in selling vehicles that most NGOs use. And there will be bigger aid budgets, and as part of that they will need to buy vehicles. I would much rather see a broadening of my corporate [clients]… but you kind of have to take whatever comes at you.”

Cox doesn’t have plans to return to the US. “From a practical standpoint it makes sense to continue to work and develop myself here versus [the US]. After some time you relate to African politics more than you do to American politics… and even the people on some level you relate to more.”