South African retailers play an important role in the growth of modern shopping malls in the rest of the continent. So says Carlo Matta, CEO of Laurus Development Partners, based in Ghana’s capital Accra. Laurus is a real estate development company focused on Ghana and Nigeria. 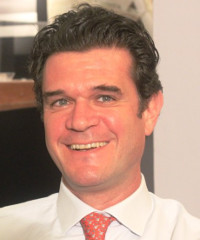 Over the past decade, South African grocery and fashion brands – such as Shoprite, Game, Mr Price and Truworths, to name a few – have grown their respective footprints across Africa. They are often the main tenants in the new modern shopping malls popping up all over the continent.

“The South African retailers are extremely important for any development in Africa,” says Matta. “They are the first movers. They are brave, I have to say, [and] they understand the African risk better.”

He says South African retailers are moving north of their border because of few growth opportunities in their home market.

Matta also notes that European retailers are slowly but surely getting more comfortable with the idea of expanding into Africa. “Now there is more and more interest from European retailers… They are not here yet, but we observe more and more groups that come here to kick the tyres.” A few months ago French supermarket chain Carrefour, the second largest in the world, announced that it will enter eight countries in sub-Saharan Africa.

Mimicking Vietnam a decade ago

Matta, who was born in Italy, started his career as an architect, spending a lot of time working on projects in Southeast Asia. He then decided to get into property development, completed an MBA and joined Hines, one of the world’s largest privately-owned real estate companies. After working for the company in Europe for a number of years, Matta tried to convince Hines to do a project in West Africa.

Conditions in countries such as Ghana and Nigeria a few years ago reminded Matta of Vietnam towards the end of the 1990s. “I have been travelling to Africa all my life for tourism… Before the conditions were not right to warrant any strong opportunity in real estate. And then as of lately, I’m thinking 2007/2008, I saw a change. It reminded me a lot of Vietnam when I was there in 1997. And Vietnam at the time was offering very good opportunities in the real estate sector.” Matta notes this story may repeat itself in West Africa.

Matta says that due to the global economic crisis, Hines was however, not ready to explore the West African market.

During his travels to West Africa, Matta’s path crossed with private equity firm Actis. This led to the establishment of Laurus, a joint venture with Actis.

One of Laurus’s main projects currently under construction is the One Airport Square development in Accra, a multi-storey mixed-use development with office space and retail facilities. Matta says in Accra, A-grade office space such as this would predominantly be rented by multinational companies.

He says that for the foreseeable future, Laurus is not likely to enter any new West African countries, and will continue to focus its efforts on Nigeria and Ghana.

“In the beginning we said, let’s focus on Ghana and Nigeria, they are English speaking, and they are the most interesting countries in West Africa. Nigeria is 170m people, and that will offer many opportunities for a long time to go. Countries like Benin, Togo, Mali, Burkina Faso, they are very small, both in GDP and population. And real estate thrives on large numbers in the population, and high GDP growth, because that means people will need real estate. I’m not sure the conditions are right there.”

Côte d’Ivoire might however, present a future opportunity. “One country we might look at in the future is Ivory Coast, because it is substantial, it is big. The market is even more advanced than here (Ghana), more developed in terms of real estate, because Ivory Coast was the pearl of Africa back in the days before the years of stagnation. So I think it will offer interesting opportunity in the next five to 10 years.”