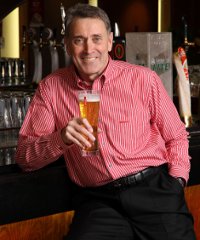 In a statement sent to the media, Hedderwick warned the two American pizza brands not to expect an easy ride in South Africa.

Below is Hedderwick’s full unedited statement:

A lot has been written in the media over the past few weeks regarding the arrival of both Pizza Hut and Domino’s Pizza in South Africa, with both spokespersons signalling their intention to stir things up within the pizza space in the short term, not to mention making certain comments about the existing pizza brands in South Africa concerning issues such as quality, service, delivery, innovation, etc.

Debonairs Pizza is one of those existing brands and with its 23-year history, not just a ‘Johnny-come-lately pizza joint’. On the contrary we would claim that Debonairs Pizza pioneered take-home pizza as a category in South Africa as well as the concept of home delivery. We are also South Africa’s leading quick service restaurant pizza brand and have over the years won many accolades for quality, service and innovation – as voted for by the people who really matter – the South African public. The brand has also won many industry awards as a Franchisor.

Our attitude to competition, which we have experienced throughout Famous Brands’ 50-year trading history, and prospered despite it, has always been that we welcome the contest but that none of our hard-earned market share is for sale.

Not so long ago Mr. Carlo Gonzaga of Taste Holdings – who, by the way, was a Debonairs Pizza franchisee in an earlier life – expressed ambitious plans for the pizza market with Scooters Pizza; the same Mr. Gonzaga has subsequently publicly stated that he now plans to convert all of their Scooters Pizza brand franchised restaurants to Domino’s Pizza. Now the current talk from Mr. Gonzaga is all about Domino’s Pizza doing what he suggested Scooters Pizza would do. . . .

And joining the pizza category fray over the past few days has been Mr. Randall Blackford, general manager of Pizza Hut SA, part of the Yum! Brands group.

Nothing energises me more than being involved in a good ‘scrap’ to defend our business, so my message to Messrs. Blackford of Pizza Hut and Gonzaga of Scooters is very simple: We will fight with every ounce of our resolve to protect not only our Debonairs Pizza market share, but also, and just as importantly, protect every single one of our franchise partners who have invested in the Debonairs Pizza brand.

Let the Pizza wars begin and let’s allow the South African consumer to make the ultimate decision by voting for their favourite pizza brand with their wallets and their throats.

Earlier this year, Taste Holdings announced it is bringing Domino’s Pizza to Southern Africa. Taste currently owns the Scooters and St Elmo’s pizza restaurant brands. Existing franchisees will be given assistance to convert to Domino’s.

Pizza Hut, owned by Yum! Brands, recently launched its first store in Johannesburg. It has plans to open another six by the end of the year; expansion into Zambia and Angola are also on the cards.

This is not Pizza Hut’s first venture in South Africa. They were in the country a few years ago with a large sit-down dining concept, which didn’t work as well as expected. This time around they are focusing on smaller outlets catering for the delivery and take-away trade.