When American Randall Blackford arrived in South Africa with his family nine months ago, he didn’t know what to expect. He says they have been struck by the friendliness of South Africans. However, he quips, his two young boys were disappointed to learn there would be no elephants in their backyard. 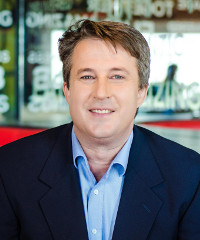 But Blackford is not in South Africa for a safari. His job is to build the Pizza Hut brand in sub-Saharan Africa. Prior to his current role, he worked for five years in Dubai for Yum! Brands – the parent company of KFC, Pizza Hut and Taco Bell.

This is not Pizza Hut’s first venture in South Africa. They were here a few years ago with a large sit-down dining concept, which didn’t work as well as expected. This time around they are focusing on smaller outlets catering for the delivery and take-away trade.

Pizza Hut launched its first store in Johannesburg last week, and has plans to open another six by the end of the year. Expansion into Zambia and Angola are also on the cards.

Being an international brand however does not guarantee success in the South African market. Many South Africans will be quick to explain, for instance, why they prefer home-grown hamburger restaurant Steers over McDonald’s.

The pizza market is also competitive with numerous well-established brands such as Debonairs and Roman’s Pizza, to name a few.

Earlier this year, Johannesburg Stock Exchange-listed Taste Holdings announced it is bringing Domino’s Pizza to Southern Africa. The deal has however run into legal complications. Taste currently owns the Scooters and St Elmo’s pizza restaurant brands. Existing franchisees will be given assistance to convert to Domino’s.

To lure South African customers, Pizza Hut has introduced some localised menu options such as a boerewors (a popular locally-made sausage) pizza as well as a spicy chicken peri-peri pizza.

Blackford doesn’t seem too fazed by South Africa’s sluggish economy, which according to Morgan Stanley is expected to grow by a meagre 1.3% this year.

“We are really bullish about the country of South Africa. Whilst the country has some ups and downs, the rising middle class and increasing incomes have made us super excited about it.”

He is also encouraged by the success of KFC which has over 700 outlets in South Africa.

And in addition, Pizza Hut sees South Africa as a stepping stone to the rest of the continent.