In a fancy Manhattan hotel in New York, women in colourful traditional African gowns make their way to one of the conference rooms. Their outfits provide a fascinating contrast to the grey and black business suits surrounding them. The crowd is diverse, but is gathered because of one thing: shea butter that comes from an African nut and is used in cosmetics as a lotion or moisturiser. 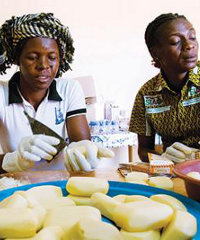 Women packing soap made from shea butter at a processing unit run by the Nununa Federation of Shea Producers in Burkina Faso. Photo: Roel Burgler/Hollandse Hoogte/Redux

The Shea Butter Trade Industry held its first-ever conference in North America in May 2013. The occasion was an opportunity for African producers to mix with cosmetics industry giants such as L’Oréal and the Body Shop. The demand for shea butter has risen so much in recent years that African producers have started calling for fair prices for their labour.

Shea butter comes from the nuts of karité trees that grow in the Sahel region extending from West to East Africa, from Guinea and Senegal to Uganda and South Sudan. For centuries shea butter has been called “women’s gold” not only for its rich golden color (although shea butter can also sport a deep ivory hue, depending on the region) but also because it primarily provides employment and income to millions of women across the continent. Using traditional methods, women, often organised in cooperatives, harvest karité fruits. They then crush the nuts inside to extract the precious butter, which is boiled, cleaned, packaged and sold at the local markets or exported. Shea butter is non-toxic and edible, and can be used in cooking. But it is mostly used for cosmetic purposes.

“I have been making good money for my family selling shea butter,” Lucette Ndogo, a well-known shea butter vendor at the Marché Central in Douala, Cameroon, said in an interview with Africa Renewal. She purchases the shea butter in bulk from Burkina Faso and sells it for a profit to clients who have come to trust the quality of her products.

Antoine Turpin of IOI Loders Croklaan, a global producer of edible oils, told The New York Times that “shea [butter] is an important source of revenue to millions of women and their families across Africa. Empowering these women economically is crucial to the industry’s sustainability.” The New York Times says Turpin’s company alone purchases an estimated 25% of all shea nuts picked by women in West Africa.

With the demand for natural and organic products rising in the Western world, shea butter has become a hot commodity. The precious substance is used for many different types of cosmetics and skin care products because of its natural healing properties; people prefer it to the harsh chemicals, artificial colors and fillers often used in conventional cosmetics.

Shea butter is also used in food products such as chocolates. Confectioners use it as a cocoa butter equivalent to give chocolates a higher melting point and a smoother texture. The butter is used in popular chocolate bars such as Kit Kat and Milky Way.

According to The New York Times, a survey conducted in a village in Burkina Faso by USAID in 2010 found that for every $1,000 of shea nuts sold, an additional $1,580 in economic activities, such as reinvesting the money in other trades, was generated in the village. Shea butter exports from West Africa garner between $90 million and $200 million a year, according to the newspaper. The demand comes not only from major corporations but also from millions of entrepreneurs who hope to make a fortune in the distribution of this “women’s gold”.

With high demand come ethical issues, which often arise with products originating from the developing world, including Africa. Because of shea’s newfound popularity, the number of shea fair trade cooperatives and associations seeking a fair deal for African women has increased.

Fair trade is an organised social movement dating from the 1980s that promotes better trading conditions between producers from developing countries and buyers in the developed world. Proponents also seek to raise consumer awareness, believing that an educated consumer may be willing to pay more for goods if the producer gets a fair deal.