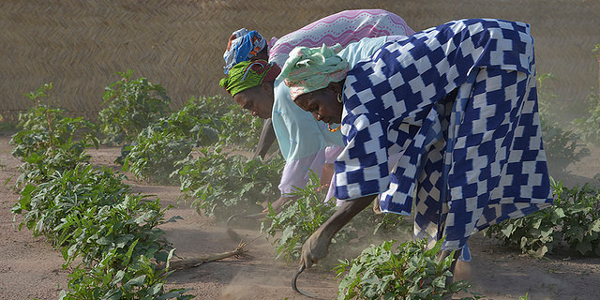 Colonialism brought large-scale farming to Africa, promising modernisation and jobs – but often dispossessing people and exploiting workers. Now, after several decades of independence, and with investor interest growing, African governments are once again promoting large plantations and estates. But the new corporate interest in African agriculture has been criticised as a “land grab”.

Small-scale farmers, on family land, are still the mainstay of African farming, producing 90% of its food. Their future is increasingly uncertain as the large-scale colonial model returns.

To make way for big farms, local people have lost their land. Promises of jobs and other benefits have been slow to materialise, if at all.

The search is on for alternatives to big plantations and estates that can bring in private investment without dispossessing local people – and preferably also support people’s livelihoods by creating jobs and strengthening local economies.

Contract farming is often touted as an “inclusive business model” that links smallholders into commercial value chains. In these arrangements, smallholder farmers produce cash crops on their own land, as ‘outgrowers’, on contract to agroprocessing companies.

Then there is growth in a new class of “middle farmers”. These are often educated business people and civil servants who are investing money earned elsewhere into medium-scale commercial farms which they own and operate themselves.

So what are the real choices and trade-offs between large plantations or estates; contract farming by outgrowers; or individual medium-scale commercial farmers?

These different models formed the focus of our three-year study in Ghana, Kenya and Zambia. Evidence suggests that each model has different strengths. For policy makers, deciding which kind of farming to promote depends on what they want to achieve.

Our cases confirm the characterisation of large plantations as being “enclaves” with few linkages into local economies. They buy farming inputs from far afield, usually from overseas, and in turn send their produce into global markets, bypassing local intermediaries.

Plantations are large, self-contained agribusinesses that rely on hired labour and are vertically-integrated into processing chains (often with on-farm processing). They’re usually associated with one major crop. In Africa, these started with colonial concessions, especially in major cash crops such as coffee, tea, rubber, cotton and sugarcane. Some of these later became state farms after independence while others were dismantled and land returned to local farmers.

Many plantations do create jobs, especially if they have on-site processing. Plantations may also support local farmers if they process crops that local smallholders are already growing. For example, we found an oil palm plantation in Ghana that buys from local smallholders, giving them access to processing facilities and international value chains they would otherwise not reach.

But, typically, plantations have limited connections into the local economy beyond the wages they pay. Where production is mechanised, they create few jobs, as we found in Zambia: the Zambeef grain estate employs few people, and most of these are migrants whose wages don’t go into the local economy. And the jobs that are created are invariably of poor quality.

The main story is that plantations take up land and yet often don’t give back to the local economy. In the cases we researched, all the plantations led to local people losing their land. For instance, the establishment and later expansion of the 10,000ha Zambeef estate led to forced removals of people from their cropping fields and grazing lands.

There are some benefits from plantations and estates. But, given more than a century of bad experience, it may be time to concede they seldom – if ever – live up to their promises.

Contract farming brings benefits for some

Contract farming has a long history in Africa, dating back to colonial times. As with plantations, these arrangements were largely for the major cash crops, including cocoa, cotton, tobacco and sugarcane.

Contract farmers are smallholders who enter into contracts with companies that buy and process their crops. Sometimes members of outgrowers’ households might also get jobs on larger “nucleus” estates run by the companies. Whether or not they benefit, or get mired in debt and dependence, depends entirely on the terms of these contracts. Our study looked at contract farming in Ghana’s tropical fruit export sector, in French bean production in Kenya and in sugarcane farming in Zambia.

Contract farming has been hailed by some as the “win-win” solution, enabling commercial investment for global markets without dispossessing local farmers. Farmers farm on their own land, using their own family labour, while also accessing commercial value chains – rather than being displaced by large farms. But we found that this is not necessarily the case. Crucially, there are different kinds of arrangements that determine who benefits.

In Kenya, contract farmers are poorer than most farmers around them. For them, farming on contract provides a crucial livelihood, especially for poor women, who cultivate French beans for the European market and combine this with seasonal jobs on big farms.

In one Zambian block scheme all outgrowers gave up their land to Illovo, a South African company that grows sugarcane. The company pays them dividends. Here, the landowners, typically the old patriarchs, benefit from cash incomes. Young people lose out: they neither inherit the land nor control the cash incomes.

Between the large plantations and the small contract farmers is another model: medium-scale commercial farms owned by individuals or small companies. We studied areas where medium-scale farms were dominating: mango farmers in Ghana, coffee farmers in Kenya and grains farmers in Zambia. While this kind of medium-scale farming also has colonial origins, the past two decades have seen massive growth in new “middle farmers”. Many of them are male, wealthy, middle-aged or retired, often from professional positions.

The medium-scale commercial farming model has a lot to offer. We found that they create more jobs and stimulate rural economies more than either big plantations or smallholder contract farmers. Yet cumulatively, such farms may threaten to dispossess smallholders, just as the big colonial and more recent plantations and estates have done.

The push behind the explosion of the “middle farmers” in the countries we studied has been investment by the educated and (relatively) wealthy. In Ghana in particular, we found, their expansion has displaced smallholders. Cumulatively, even modest-sized farms have led to substantial dispossession and reduced access to land.

Their informal employment patterns mean poor working conditions and few permanent jobs. But, unlike the plantations, these farms are well connected with the local economy. Building on social networks, these “middle farmers” often buy inputs and services from local businesses. At least some of their produce is sold into local markets.

While policy choices are of course political, they can and should be informed by research about the implications of these different pathways of agricultural commercialisation. What is clear from our research is that different kinds of commercial farming will have different effects on the economy. It’s not just about efficiency. Ultimately, it’s about who wins and who loses.