A commercial cassava farming business in Nigeria requires crop financing as well as a five-year loan to purchase additional equipment and to upgrade infrastructure. The company is seeking assistance from credible financial institutions or individuals. Graham Hatty is a qualified farmer from the Gwebi Agricultural College in Zimbabwe. In 1963 he bought a farm 35 kilometres from Harare, which he put under irrigation and farmed very successfully for 41 years. In 2004, Graham and his wife Judy, however, lost their land due to the Zimbabwean government’s land reform programme.

In 2005, Graham and Judy, together with 12 other displaced Zimbabwean farmers, were invited by the governor of Kwara State in Nigeria to start with commercial agriculture. Each famer received 1,000 hectares of land in the Shonga area of the state. The Hattys named their farm Ireti, which means “hope” in Yoruba.

Graham decided to concentrate on the cultivation of cassava, a rugged root crop that looks like a large sweet potato, while other farmers focused on areas such as soya beans, poultry and dairy production. 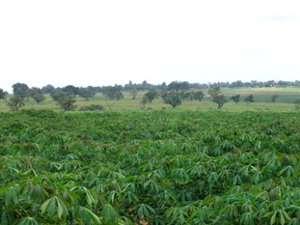 Cassava is one of the most widely cultivated crops in Africa. The crop can be processed into numerous products, including cassava chips, flour and starch.

Due to its large population of over 160 million people, Nigeria has a significant demand for flour. In order to boost the commercialisation of cassava, the Nigerian government has directed bakers to add a certain percentage of cassava flour into their mixes. Cassava flour is much cheaper than imported wheat flour.

Ireti Farm already has a market for its cassava tubers. The farm is currently supplying cassava to a 90 tonnes a day capacity cassava processing plant close to Nigeria’s commercial hub Lagos. Another processing facility is presently being planned for the Shonga area.

Nigeria does not have an agricultural bank and commercial banks have very little knowledge of lending to the agricultural sector. The Hattys have tried, unsuccessfully, for years to obtain reliable financing for their crops. Ireti Farm requires annual crop finance in order to produce fresh cassava tuber all year round. At present they are looking at growing 400 hectares of cassava every year, yielding an average of 40 tonnes per hectare. The annual financing requirement is 70 million Nigerian naira (about US$440,000).

In addition to crop finance the farm requires a five-year loan to purchase more trailers to assist with the reaping of cassava tuber and for the construction of a loading ramp, to facilitate the loading of trucks.

See the links below for articles written about the Shonga project.

For more information about this financing opportunity, contact Graham and Judy Hatty at the details below: