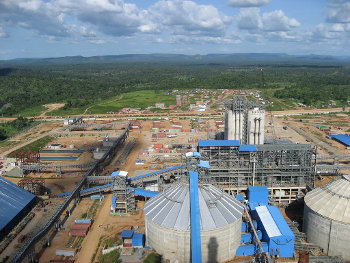 The company is part of the Dangote Group, which also has interests in a variety of industries from real estate to food processing. The group was founded by CEO Aliko Dangote, who according to Forbes magazine, is also the richest man in Africa with a net worth of US$10.1 billion. The company started in 1981 as a trading business.

Dangote Cement produced over 8 million tonnes of cement in 2010, over half of Nigeria’s domestic output. It was also responsible for almost half of Nigeria’s imported cement. In addition, the company has various interests in cement plants and trading in a number of other African countries.

Dangote’s closest rival in Nigeria is French company Lafarge that produced around 4.2 million tonnes in 2010 from its subsidiaries Lafarge-WAPCO and Ashaka Cement. Lafarge also owns a stake in Unicem.

In an earlier statement, Dangote said it will expand capacity at two of its three cement plants in Nigeria, which will boost output to 20 million tonnes per year. “This will more than meet domestic demand, ending the need for large-scale imports and enabling the country to start exporting large volumes to the region,” says Ecobank.

However, Dangote Cement has expansion ambitions beyond Nigeria. The company has invested, or is planning to, in plants and import terminals in Senegal, Ghana, Zambia, South Africa, Benin, Cameroon, Equatorial Guinea and Angola.

Ecobank says that if these investments come to fruition, Dangote’s total capacity will be 46 million tonnes by 2015. “If achieved, this would make Dangote Cement the world’s sixth largest cement producer by volume, and put it among the top five cement traders globally.”

Dangote’s expansion could pose a very real threat to multinationals operating in Sub-Saharan Africa, including Lafarge, Holcim of Switzerland, and Germany’s Heidelberg. “Although all of its planned capacity increases many not come on stream as quickly as scheduled, either because of planning or financing delays, Dangote Cement’s dramatic growth will nonetheless pose a serious challenge to the region’s existing suppliers.”

Ecobank says that even though Dangote Cement’s multinational rivals have far larger revenues, reflecting the global reach of their operations, the Nigerian company has several advantages over them. By far the most significant is its low level of debt which, at just $600 million in 2010, is less than one-thirtieth of Lafarge’s debt burden. “This has resulted in a low debt-equity ratio considering the capital-intensive nature of cement manufacturing, as well as a strong current ratio, which enables the company to easily service it short-term liabilities. In contrast Lafarge’s high leveraging has led to the company’s debt being downgraded to ‘junk’ status, greatly increasing borrowing costs and forcing it to sell off several key businesses, starting with its gypsum subsidiaries,” states the report.

In addition, Dangote Cement’s production capacity is also more concentrated than its competitors, with an average capacity of 1.3 million tonnes per plant, double that of its rivals, making its operations more cost effective.