Over the past years Kenya’s tech industry has attracted significant attention. Young entrepreneurs hanging out at business incubators such as Nairobi’s iHub have developed software and apps to solve numerous problems – from a mobile platform providing farmers with crop prices, to an e-commerce service that connects craftswomen in developing countries. The Kenyan government is also planning to build a new tech city outside the capital, called Konza City, which it hopes will attract major IT companies. 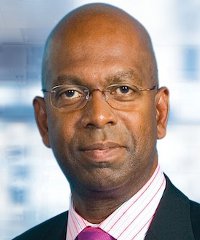 Most of the media hype, however, started with the launch of the M-Pesa mobile money transfer platform in 2007, developed as a partnership between Kenyan operator Safaricom and UK-based Vodafone. M-Pesa, with currently around 15 million registered Kenyans, is used for everything from paying for a beer at a bar to sending money to one’s family in the rural areas.

M-Pesa is, however, only a money transfer service, and does not provide users with a real interest bearing bank account. More than a third of Kenyans are currently unbanked.

During a session at this year’s World Economic Forum on Africa, held in Addis Ababa, James Mwangi, CEO of Kenya’s Equity Bank, said he doesn’t think the ability to transfer money over a mobile phone means that a person is financially included.

“One of the questions that I have is: are we assuming money transfer is financial inclusion? To me that is not financial inclusion. We are just rephrasing the old way of transporting money from urban centres to rural areas using busses,” Mwangi noted.

He said unbanked persons that use mobile money transfer services cannot build up credit histories, and therefore will struggle to borrow money when they need it.

Safaricom has obviously listened to comments such as these, and this week unveiled a new product that will give millions of Kenyans the opportunity to become financially included, properly. The product is called M-Shwari and will allow M-Pesa customers access to an interest bearing savings account as well as the ability to take out small loans.

The bank behind this initiative is the Commercial Bank of Africa, Kenya’s largest privately owned lender. Safaricom customers can sign up for the M-Shwari account directly through their phones. Applications for a mini-loan are also done on the handset.

Safaricom says people will be able to save as little as 1 Kenyan shilling, and earn interest of up to 5% per year on their savings. Customers can also borrow amounts as low as 100 shillings, and the more they save, the more credit they will qualify for.

“It is simple. There are no ledger fees, no limits on the frequency of withdrawals, no minimum operating balance and no charges on deposits from M-Pesa to the M-Shwari account. You do not need to go to a branch and fill in application forms. Just one click on your phone and you will have a bank account at no cost,” said Safaricom CEO Bob Collymore in an official statement.

M-Shwari is the second banking product to be linked to M-Pesa after M-Kesho, a partnership with Equity Bank, failed to live up to expectations. One of the criticisms against M-Kesho was that users had to visit a physical bank outlet for certain transactions.

“M-Shwari is a transformational service: saving is no longer the privilege of an elite; all Kenyans can now save, even the smallest amounts and at their own pace,” commented Michael Joseph, former Safaricom CEO, and now director for M-Pesa within the Vodafone Group.

In a 2010 interview with How we made it in Africa, Susie Lonie, who was recruited to develop and manage the M-Pesa project on the ground in Kenya from pilot to commercial operation, said that she expects “to see an increasing level of integration between new types of financial services such as M-Pesa and the more traditional financial services infrastructure” in Africa. M-Shwari is definitely a step in that direction.