Joanne Mwangi is one of Kenya’s most respected entrepreneurs, and has won numerous awards for her efforts in building and transforming a small marketing agency into a leading regional group. 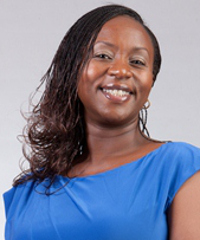 In 2010, PMS Group became the first woman-owned business and the only one since to be voted number one in the Top 100 SMEs competition in Kenya. In 2009, Mwangi beat women entrepreneurs from 75 countries to win the Organisation of Women in International Trade’s Woman of the Year award.

Mwangi ventured out on her own 18 years ago after realising her ambition to climb the corporate ladder was hindered by her gender.

Mwangi was then at her third job, working at American multinational Colgate-Palmolive Company. People with lesser knowledge and experience were hired as her bosses and earned more than she did.

“At that time the world was different… being black and being female were things that blocked your progress. It was the worst possible combination,” says Mwangi. “I realised I [had] to be either a trailblazer breaking through that glass ceiling or knock my head on that glass ceiling for the rest of my life. I have always been ambitious. I didn’t want to be just a mid-level manager. I wanted to rise to the very top.”

Mwangi attributes her success at PMS to the lessons she acquired at Colgate which she describes as “the best employer I ever had because they took the trouble to train us”.

“They wanted us to be world-class marketers. Colgate is the reason I would give, more than even my degrees, for my success,” she says. “I was marketing manager [but] I was taken to the factory to learn how the product I was selling is made. They gave me an all-rounded perspective and that helped me a lot when I started my entrepreneurship journey.”

Mwangi started her journey in marketing straight out of university when she joined a local newspaper to sell advertising. With a dismally low success rate, Mwangi’s job was “depressing” and she sometimes cried when proposals were rejected.

“Anybody in marketing knows that the two hardest things to sell in this world are insurance and advertising space. So I think I started in the hardest possible environment. It toughened me. I just had to grow thick skin. I had to learn that rejection is not personal. It was the product that they were rejecting, not me.”

Mwangi tells How we made it in Africa that leaving the corporate world to start her own business was “extremely difficult”.

“It was not easy. Being self-employed [at the time] was the least glamorous thing in Kenya. It was only failures who were self-employed. Anyone who was worth anything was employed in corporate Kenya, wearing a tie to work.”