When Roots Marketing Communications first opened shop in Tanzania, all the staff members lived in one house that doubled as the company’s office. In addition, they also rented out two rooms. 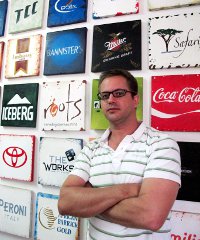 “The five of us were upstairs, the office was downstairs. We just cut costs down totally. We would all meet for breakfast and then start working,” says South African-born Ulric Charteris, co-founder of Roots.

Five years on, the company is still based in the same building in Tanzania’s commercial capital Dar es Salaam, but with no one actually living there. From its humble beginnings Roots managed to establish itself as one of Tanzania’s top advertising agencies, looking after some of the country’s leading brands.

Spotting a gap in the market

Before starting Roots, Charteris was a creative director at one of South Africa’s largest agencies. After spending some time in Dar es Salaam, working on a campaign for South African mobile operator Vodacom’s Tanzanian subsidiary, Charteris saw a gap in the market for a new agency. In 2006, he and two colleagues quit their jobs in Johannesburg and relocated to Dar es Salaam.

“It was one hell of a risk. We opened up a company without any clients,” explains Charteris. Luckily he and his two partners – who are not involved in the company anymore – had strong experience in South Africa with a number of awards behind them. Charteris’s work for Vodacom Tanzania, a campaign that was well-known at the time, also helped.

“We had the credentials right up front. We could go in and say, ‘This is what we did on Vodacom, although it was for another agency’. However, it was a lot of hit or miss. We wasted a lot of energy and a lot of time on trying to get business,” says Charteris. “When you start out you just take whatever business you can get. If you can make $100 on doing a poster, you do it.”

Roots landed its first client when it was asked by Tanzania Breweries to handle the Kilimanjaro Lager brand, the second biggest selling beer in the country. To this day, Roots still has the Kilimanjaro account. It has since also added numerous other clients such as the Tanzania Cigarette Company, Toyota and Coca-Cola, to name a few.

Charteris says he is heavily reliant on his Tanzanian-born staff to come up with marketing concepts that will work in the market. “I can be in Tanzania for the next 20 years, but I’m never going to be a Tanzanian. I 100 per cent rely on Tanzanians to give me insight and tell me what is relevant. My job is to isolate insights and ideas and not to try and come up with things myself, because I will fail.”

Charteris says it is essential for foreign business people that want to invest in Tanzania to have a model where the local manger is also a shareholder. “The only way that something is going to work in Tanzania, specifically in communications, is to have an owner-manager culture, where you have someone on the ground who is responsible for the product and who has a share in the business. Who is going to work hard for someone else’s bank account?”

One of the major challenges companies in Tanzania face is protecting their market share from grey goods – identical products that enter the country through unofficial channels. Charteris uses the example of toothpaste brand Colgate. “They spend a lot of money advertising their toothpaste here, only for guys to bring in cheaper product through a different distributor. I’ve met a lot of people who have set-up companies here and paid a lot of money for the rights to a specific mining product, for example. As soon as they advertise, they find that someone is supplying it cheaper through the back door. And that happens all the time. I’ve known a few people who have gone out of business because of that. Don’t invest your money doing something that you actually don’t have ownership of, or someone is going to leverage your investment.”

Charteris says there are definitely plans to expand to other east African countries such as Kenya and Uganda. He is, however, not interested in setting up a new company from scratch and will only branch out to other territories through partnership agreements. “Setting up a bricks and mortar place in Tanzania has given me a lot of grey hair and I will never go through that process again.”

Despite the company’s success over recent years, Charteris says that the advertising industry doesn’t allow one to rest on one’s laurels. “You are only as good as your last job. It is all intellectual capital. This whole building, there are no assets to speak of. Besides some computers and software, everything is about intellectual capital. So if you lose key people, or if a client decides to go somewhere else, you got to start again. It is not like a factory where you have all this machinery, and you know if something goes wrong you can sell it and get back something on your investment. You continuously need to be one step ahead of the game and make sure that you don’t lose a client. There is no security, and that is the key to any advertising agency around the world. You can never sit back and relax.”