Climate change could have a significant impact on African agriculture over the coming decades. In a report last year the African Development Bank even speculated that the continent’s economic growth will decline by around 3% per year due to the effect of climate change on rain-fed farming. 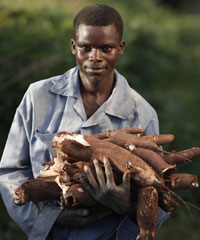 While it is impossible to accurately predict the impact of climate change, one crop could potentially guarantee Africa’s food security, regardless of the weather.

Scientists have found that cassava, the rugged root crop that looks like a sweet potato, will brush off expected temperature rises of up to 2°C in sub-Saharan Africa by 2030. What is more, cassava could even be more productive because of climate change.

Cassava is able to produce starch-rich roots in poor soils and with minimum water, making it a good crop for difficult environments.

Although cassava is the second most consumed source of carbohydrate in sub-Saharan Africa, feeding around 500 million people every day, investment in cassava research has been dwarfed by years of research into better-known staples such as wheat, rice and maize.

The Rambo of food crops

Using a combination of 24 climate prediction and crop suitability models, scientists from the Colombia-based International Centre for Tropical Agriculture (CIAT) and the CGIAR’s Climate Change Agriculture and Food Security Research Programme (CCAFS) compared the expected impacts of climate change on the production of cassava and six other key staple crops in sub-Saharan Africa – maize, potato, bean, banana, millet, and sorghum.

They found that by 2030, temperature rises of between 1.2°C and 2°C, combined with changes in rainfall, will leave cassava in a class of its own, outperforming the other crops overall.

CIAT climate scientist Andy Jarvis described cassava as a “survivor” and the “Rambo of food crops”.

“It deals with almost anything the climate throws at it. It thrives in high temperatures, and if drought hits it simply shuts down until the rains come again. There’s no other staple out there with this level of toughness,” said Jarvis

“The ideal situation is for farmers to have a diversity of crops, with cassava acting as a failsafe. This would enhance nutrition and reduce climate risk,” he added.

From staple food to beer

Despite cassava’s popularity in Africa, the crop hasn’t been a great commercial success. One of the reasons for this is because around 70% of the root consists of water, which makes it uneconomic to transport over great distances. While the cassava root can stay in the ground for many years, once it is harvested, it needs to be processed very quickly before it goes bad.

“We believe that we can make it commercially viable and expand the cassava industry on that basis,” Gerry van den Houten, SABMiller Africa supply chain and enterprise development director, told How we made it in Africa in an exclusive interview.

To overcome the challenges associated with commercial cassava production, SABMiller has partnered with Dutch company DADTCO (Dutch Agricultural Development and Trading Company), a manufacturer of mobile cassava processing equipment. “They have a simplified process, which is inside a 40-foot container… All it needs is a source of water … What that means is that you do the basic processing within the growing area, so that you don’t transport over huge distances. If you then want to process it further, then you can take it to a separate point where you can refine it further,” Van den Houten explained.