Cassava is one of the most widely grown crops in Africa, planted largely by subsistence farmers. However, the root crop, which looks like a large sweet potato, hasn’t been a great commercial success. One of the reasons for this is because around 70% of the root consists of water, which makes it uneconomic to transport over great distances. While the cassava root can stay in the ground for many years, once it is harvested, it needs to be processed very quickly before it goes bad. 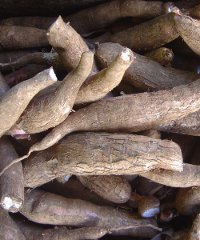 SABMiller, the world’s second largest brewer by volume, however, wants to prove that cassava can be a commercial success. The company has launched the first commercially produced cassava beer, branded Impala, in Mozambique. “We believe that we can make it commercially viable and expand the cassava industry on that basis,” Gerry van den Houten, SABMiller Africa supply chain and enterprise development director, told How we made it in Africa in an exclusive interview.

If Impala proves to be successful in Mozambique, cassava beer will be rolled out to other markets in Africa. SABMiller has a presence in numerous countries across the continent.

According to Van den Houten, Impala will be aimed at low-income consumers and priced at 65% to 70% of the price of mainstream beers. It is going for “the market where people are currently drinking very cheap and often horrible commercial spirits”.

Cassava is only one of the crops SABMiller is looking at in its effort to localise its supply chains in Africa. According to Van den Houten, the brewer currently imports close to 75% of the raw materials that go into making beer in Africa (excluding South Africa).

“These are quite wrong and costly supply chains, so we’ve been looking for some time at replacing those imports with local production,” he explains. “At the same time we are also looking at other raw materials that we don’t normally use in brewery.”

Dealing with smallholder farmers can be difficult. Ensuring continuity in supply is a major challenge. Van den Houten says there are areas in Mozambique where smallholder farmers still operate on a barter system. “People are not involved in the normal economic cycle. So that is where you are starting from.”

“This is the reason why we have gone for the hub-and-spoke model because the commercial farmers are in that area, they know farming, they know the local conditions. They are on the ground working with the smallholder farmers. And we believe that is the best model for the development of these [smallholder] farmers,” notes Van den Houten.

To overcome the challenges associated with commercial cassava production, SABMiller has partnered with Dutch company DADTCO (Dutch Agricultural Development and Trading Company), a manufacturer of mobile cassava processing equipment. “They have a simplified process, which is inside a 40-foot container. . .  All it needs is a source of water . . . What that means is that you do the basic processing within the growing area, so that you don’t transport over huge distances. If you then want to process it further, then you can take it to a separate point where you can refine it further,” explains Van den Houten.

So what does beer made from cassava taste like? “It tastes like a lager beer. Obviously it has its own profile. It is a little bit more . . . sour tasting than normal lager beer.”