Kenya is undoubtedly a key player in Africa’s technology revolution. Since the introduction of celebrated mobile money service M-Pesa in 2007, Kenya has produced multiple mobile technologies and earned its spot globally as an innovation hub. Out of Nairobi’s several innovation spaces have come apps that enable users to make payments, interact virtually with doctors, and evade the city’s notorious traffic snarl-ups. 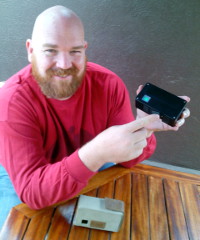 Despite the notable progress, Kenya’s technology industry has mostly concentrated on creating software. However, a few entrepreneurs are now taking the leap into developing hardware and tech-enabled consumer products.

Earlier this month a Kenyan company launched a mobile Wi-Fi device aimed at overcoming internet and electricity challenges in emerging markets. The product is called the BRCK, and while it can function anywhere, it is specifically designed to work in harsh environments like Africa.

Next week Able Wireless, an on-demand streaming service and wireless provider, will be launching its locally designed decoder that enables users to access content and broadband internet. The company is hoping to eliminate movie piracy and enable content producers to generate income. Users will be able to access premium streaming content for as little as US$6 a month.

Another entrepreneur working on a hardware project is electronics engineer Charles Muchene, CEO of CladLight. His company is piloting an automated safety jacket that he hopes will help reduce road accidents among motorcycle riders.

The reflective vests, dubbed Smart Jacket, are fitted with lights that are integrated and controlled wirelessly from a motorcycle’s indication system and clearly show the rider’s intent to turn right, left or brake.

“When a motorist hits a motorcycle rider they always say they either did not see the rider or they did not know the rider wanted to turn. We did our research and found out that if we increased the visibility of riders there would be fewer accidents,” says Muchene.

Although there are only a handful Kenyan companies manufacturing and designing consumer devices, BRCK founder and CEO Erik Hersman says the country has what it takes to grow the industry.

“That space where hardware meets software [is] just beginning globally [and] there is no reason why we can’t be in the race too,” he says.

In fact, Hersman notes that building hardware is critical for Kenya’s future standing in the global tech industry.

“I would say [hardware] is almost a necessity if we want to maintain our relevancy in the technology space globally. It is not enough for us to rest on our laurels and be this innovation hub for technology in Africa. That is great [and] a lot of us worked really hard to make that happen. However, that is only halfway up the mountain. There is still a long way to go and if we stop there then we are doing ourselves a huge disservice.”

Hersman notes there are many factors holding Kenya back in terms of hardware development.

“Hardware is hard and there’s no two ways about it. There is barrier of entry that is quite difficult for individuals to cross. It is not impossible but you do need to work hard at it,” says Hersman. “You don’t have the equipment to do rapid prototyping here and you don’t have a lot of people with the expertise to know how to do it either.”

It took Hersman and his team over three-and-a-half years to prototype, fundraise, manufacture and start shipping the BRCK. He notes that without the initial US$100,000 funding BRCK received from non-profit software company Ushahidi, the project would never have taken off. Last year BRCK raised $172,000 via crowdfunding platform Kickstarter and this month got an additional $1.2m from a group of foreign investors.

Muchene says CladLight has plans to start selling the Smart Jacket at the end of September. He explains one of the firm’s biggest challenges is access to the finance needed to pay a manufacturing company.

“Hardware is tough but I think I am built for toughness. I do programming and I known that it is relatively easier, but if the only solution to a problem is to build hardware then we have to build hardware,” says Muchene.

Although the BRCK device was designed and engineered in Nairobi, the assembly is being done in the US, while CladLight is set to manufacture in South Africa.

Muchene says manufacturing the Smart Jacket in Kenya is unfeasible due to the high costs involved. “It is undoable here. To get the electronic components, for example, is a hassle. When I buy components here it costs triple the price I would get in China or South Africa. I have to manufacture outside if I want to have an affordable product.”

Hersman shares the same sentiments, explaining how during the prototyping of the BRCK he ordered two cases at $15 each from the US and incurred huge costs in shipping and duties.

“It cost me $100 to ship them over. On top of that it cost me another $200 to have them go through duty here in Kenya. So I ended up paying $330 for two cases [and] that is a pretty big expense that most people aren’t willing to spend,” says Hersman.

While specialised talent is lacking in some fields, Hersman says this challenge can be solved through training and mentorship.

“The expertise to build BRCK did not actually reside in the country. We were very fortunate that the guy who does have the expertise happened to show up in the country. However, talent can be trained. Right now we have two understudies for our chief technology officer who are Kenyans. One of them is in her 20s and she just graduated from university, interned at Motorola in the US and so she has some experience,” says Hersman.

Gearbox – a space to build

The BRCK boss is optimistic that the establishment of a rapid prototyping, design, and manufacturing facility, called the Gearbox, will help address some of the challenges in the industry.

The Gearbox is being set up by a consortium of companies led by Ushahidi, innovation space iHub, BRCK, and sanitation startup Sanergy. The “makerspace” is expected to bridge gaps in training and access to quality tools and materials. The space is partly funded by the Lemelson Foundation and expected to open later this year.

“We have all the right things in this country to build a really solid small-scale consumer electronics base. We have tens of thousands of jua kali guys (artisans working in informal sector) and that is good. What we need is a percentage of them to upgrade themselves to this level. There is no reason why some of them couldn’t be working out of the Gearbox in the future and coming up with the next tools and equipment that all the consumers in Kenya want to buy,” says Hersman.

Just like Nairobi’s iHub offered space for software developers, the Gearbox will be open to hardware enthusiasts, artists and designers working on projects in computer technology, industrial art, robotics and electronics.

Muchene notes that Gearbox will make it easier for entrepreneurs to access tools that are otherwise very expensive.

“Once we have the machinery that we are lacking I believe more entrepreneurs will be willing to get into the hardware space,” he says.