Uninterrupted internet access is but a dream in many parts of Africa. One of the reasons for this is the constant power outages that also cuts off internet connectivity. 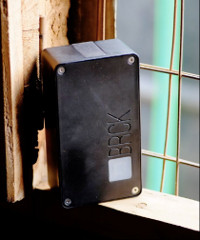 The BRCK can connect up to 20 people to the internet.

Last week a Kenyan technology company launched a mobile Wi-Fi device aimed at overcoming internet and electricity challenges in emerging markets. The product is called the BRCK, and while it can function anywhere, it is specifically designed to work in harsh environments. The rugged design allows for drops, dust and weather resistance.

Erik Hersman, CEO of BRCK, describes the device as “a router, a battery and a modem all in one”.

The BRCK sends Wi-Fi signals to up to 20 devices, including computers and mobile phones. It can connect to the internet through an ethernet cable, a SIM card or Wi-Fi bridging. In areas where the mobile network is poor, users can attach an aerial to reach a signal further away.

The device, which fits into the palm of your hand, has an eight hour battery life in full power mode and can be charged from a solar panel, car battery, computer or plugged into the wall.

When the power cuts out, the BRCK automatically switches over to its battery; when the internet goes down, it shifts to mobile data through the SIM card. “In case of a power surge it wouldn’t blow. It will just switch over to battery at that point,” says Hersman.

Hersman tells How we made it in Africa that the BRCK solves connectivity problems that could not be addressed by routers and modems made for the US and Europe where there is consistent power and connectivity.

The BRCK retails at US$200 and the company has started shipping 800 devices to 45 countries across the world.

Surprisingly, the BRCK has already received orders from customers in developed markets such as the US and Europe. Demand has come from people living on boats or travelling a lot, as well as from companies that have “things they want to connect to the internet which are sort of off the grid a little bit”.

There has also been a push for the use of the BRCK in African schools to connect tablets and computers for educational purposes.

“The funny thing is that is equally true in Europe. Schools in places where internet connectivity is less redundant and less reliable are also looking at BRCK as an option for them,” says Hersman. “Turns out that you can build a device that is actually made for our context here in Nairobi and it has huge value not just in Africa but also in Europe and America. It is a fun place to be having a product that is designed and engineered in Nairobi and shipped globally.”

It has taken Hersman and his team over three and a half years to prototype, fundraise and finally manufacture the BRCK.

“I did not truly appreciate how difficult it is. It is a really complicated affair when you are building hardware. It is a very complex and very difficult to build a system especially if you are trying to make it simple, because simplicity is actually more complex to build.”

The device is made out of components from Asia, designed and engineered in Nairobi and assembled in the US. Hersman says it is cheaper to assemble in the US than in Kenya.

Manufacturing in China would be even more cost-competitive, but Hersman says it is not currently the right option because the company is still making tweaks to the product.

“Once you go to China you don’t want anything to change. China is cheaper to assemble but it is a place that until you get to the 10,000 unit level, you want to be a little careful with going there.”

Although Hersman would like to manufacture the BRCK in Kenya, local regulations and import duties on components make it unfeasible.

“It is too expensive. There is no manufacturing of consumer electronics and telecoms done here.” Hersman says the important thing is that the design and engineering is happening in Nairobi. Claims of “Made in Africa”, he says, are just “marketing for the most part”.

“There is another thing that is actually more important, which is ‘designed for Africa’. If you design for Africa it is more compelling because you are doing it for one of the harshest consumer environments in the world where [consumers have to worry about] dust, water [and] shock.”