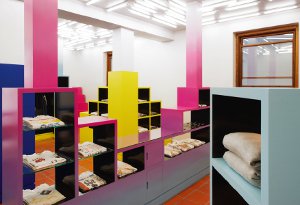 Topshop has partnered with Cape Town-based boutique Unknown Union to host the “shop-in-shop”. A selection of Topshop and Topman merchandise is available on the first floor of Unknown Union’s store in Cape Town.

“We are delighted to be showcasing within Unknown Union. The store has a great design aesthetic and carries some excellent brands so we are very pleased to be part of the mix,” commented David Shepherd, managing director of Topman.

The pop-up outlet follows months of speculation that Topshop will be launching in South Africa.

It is unclear if Topshop will open a stand-alone store in South Africa, although the pop-up shop suggests that it might be testing the market. “They have a history of doing pop-ups in markets that they are interested in opening stores in, but I think [this] is largely a promotional effort on their part,” Sean Shuter, director of Unknown Union, told How we made it in Africa.

“Given the reaction that we got to this, it would certainly make sense for them to consider doing their own stand-alone stores at some point, but I’m not really privy to those discussions. What their long-term plans are for the market, I’m not really sure,” he added.

The pop-up store will run until the end of October.

Topshop’s entry into Africa comes at a time that many American and European retailers are eyeing opportunities on the continent.

In March Gap Inc. opened two stores in South Africa. The retailer is reportedly using South Africa as a base for expansion into the rest of the continent.

Last year How we made it in Africa reported that Spanish fashion chain Mango aims to have a presence in each of Nigeria’s major cities. Mango opened its first outlet in Lagos in December 2009.