Many emerging tourism destinations in Africa have identified surfing as a target market, reveals the WTM Global Trends Report 2014 by Euromonitor International, first released in November at World Travel Market. 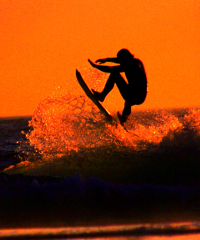 South Africa has an established reputation with the international surfing community but other countries are gaining a foothold. Sierra Leone hosted a week-long competition and festival this September while Ghana will host the Africa Surf Series next year.

Some specialist tour operators are already active in the region. Family surfing holidays in Madagascar, Zanzibar and Mozambique are available from South African tour operator All Aboard Travel, while UK-based Errant Surf includes Morocco, Ghana, South Africa and Mozambique among its surf adventures itineraries. Other countries with potential include Liberia, Cote d’Ivoire, Cape Verde and Senegal.

The International Surfing Association has made expansion of the sport on the continent a major priority, aiming to stimulate and develop local economies by increasing tourism and creating new jobs.

“If surf tourism is developed in a sustainable fashion, it can lead to improvements in healthcare, education, job opportunities and infrastructure,” said the association’s Africa advisor, Sean Brody. “Additionally, the sport of surfing acts as a catalyst for peacekeeping, since the youth have a positive activity to focus on.” Brody also runs the Kwepunha Surf Retreat in Liberia.

Estimates suggest that some 35 million across the world are regular surfers. Traditionally more popular in the Americas, Europe and Australasia, surfing is also growing in popularity across African countries, benefiting intra-regional and domestic travel. The WTM Global Trends Report 2014 suggests that “combining a surf holiday with traditional African tourist attractions such as safaris is an effective way for travel retailers to attract older surfers who are prepared to spend more”.

However, concerns over the possible spread of the Ebola virus could have a negative impact.

Euromonitor International’s head of travel and tourism, Caroline Bremner, added: “Overall, we see tourism in Africa benefiting from solid economic expansion and a strengthening transport infrastructure in terms of hotel openings and flight connections. Surfing can capitalise on this and be a significant driving force for development across the continent’s coastal communities.”