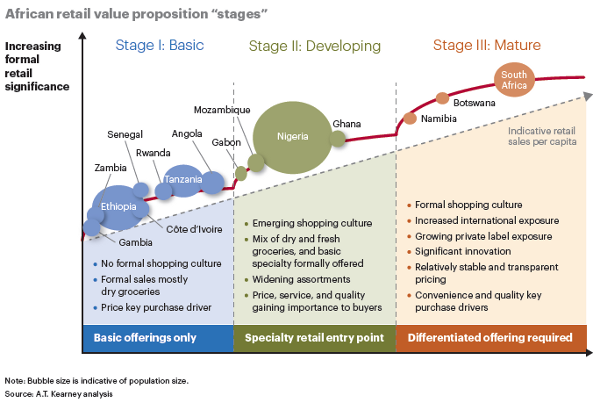 In recent years there have been growing interest in sub-Saharan Africa’s formal retail industry. While most sales are still through informal channels like open-air markets and kiosks, modern retailers (both African and international companies) are growing their footprint. Cities such as Lusaka, Nairobi, Lagos and Accra have also seen the construction of numerous western-style shopping malls.

In its recently published 2015 African Retail Development Index, consultancy A.T. Kearney ranks African countries according to their attractiveness for retail expansion, both now and for the future. Countries were scored on four variables – market attractiveness, country and business risk, market saturation, and the time pressure to enter or expand in the market.

Below are sub-Saharan Africa’s most attractive retail markets, as according to A.T. Kearney.

With a population of just about 1.6 million, Gabon is a somewhat surprising pick for the top retail market. But A.T. Kearney says Gabon represents a balanced profile – an attractive market; moderate to low country risk; a developing yet unsaturated market for modern trade; and little competitive pressure. Gabon’s economy is expected to grow by an average of 5.3% annually from 2014 to 2019, according to the IMF.

While trade in Gabon is still predominantly informal, a handful of French players have entered the country. The development of modern retail facilities – such as the 80,000m2 Le Grand Marché de Libreville – is also ongoing.

Gabon’s small size is however a significant downside for retailers looking for a large number of customers. “A retailer seeking scale and large volumes may not pick Gabon as their key market, but it can be a good way to gain experience in a strong regional market. And for a specialty retailer or a global sourcing concept, Gabon is definitely a market not to be missed,” notes A.T. Kearney.

Second-ranked Botswana also has a small population of about 2.1 million. What makes the landlocked country enticing for A.T. Kearney is its relatively high GDP per capita ($7,505) and stable economy, supported by a strong diamond mining industry as well as sectors such as agriculture and tourism.

Botswana is classified as a mature retail market. The country’s largest supermarket chain is Choppies, and most South African brands also have a presence.

Despite a relatively saturated retail environment, A.T. Kearney says the market as a whole is still growing. The landlocked country’s proximity to South Africa and Namibia also make it a potentially attractive entry point for retailers with something new to offer.

Oil-rich Angola is described as an “interesting place to do business” where retailers with an understanding of the market and aware of the risks “can uncover a great opportunity”. It currently has a growing retail sector with numerous new shopping malls being built.

Despite strong economic growth of an average annual rate of 10.1% (IMF) from 2005 to 2014, the sharp fall in oil prices has put a damper on the outlook for coming years. According to A.T. Kearney, Angola’s true middle class is also relatively small, with consumer spending per capita remaining on the low side.

But “with a specific proposition and a strong sense of the target market, a retailer can still find a strong opportunity” in Angola, says the report.

Nigeria is Africa’s most populous country, boasting a population of 178 million. The country is urbanising with an expanding middle and upper class. Modern supermarkets currently only account for 1% of all trade, meaning Nigeria has significant room for growth in formal retail. Online platforms such Jumia and Konga have also found traction, selling everything from electronics to fashion.

But Nigeria only ranks fourth on A.T. Kearney’s list due to its relatively low spending power as well as a difficult business environment where barriers to entry remain high and consumers have specific requirements. “Retailers that succeed [in Nigeria] will be those that do not underestimate the effort and investment to be successful.”

Tanzania’s large populace of 49 million (the biggest in the East African Community), its political stability and rapid GDP growth make it a potentially lucrative opportunity. The modern retail industry is still in its early stages of development. Tanzania only has 30% urbanisation, high levels of poverty and a GDP per capita of less than $2,000.

According to the report authors, Tanzania is large enough to introduce a mass-market concept. Dar es Salaam, the commercial capital where most of the wealth is concentrated, could also be an attractive target for the right retailer. But considering Tanzania’s small middle class and pervasive poverty, entering the country today would require a basic value proposition and a long-term view to be successful. 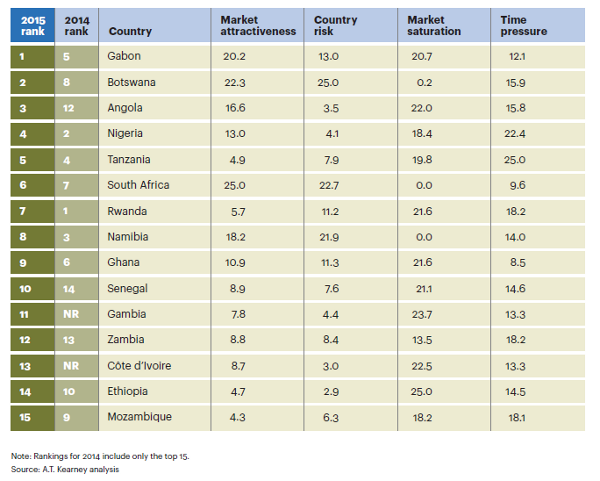