Last year How we made it in Africa reported about two entrepreneurial London-based TV producers – Andrew Osayemi and Debra Odutuyo – that are following an unconventional route in pursuit of their dream to produce a hit sitcom. 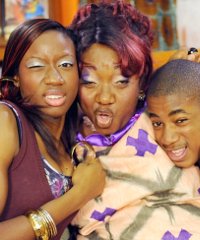 Some of the cast members from 'Meet the Adebanjos'

After years of unsuccessfully pitching the concept for ‘Meet the Adebanjos’ to mainstream British broadcasters, the show’s creators decided to raise their own funding and engage the world of the internet and social media.

‘Meet the Adebanjos’ is a series about the lives of a fictional British-Nigerian family living in the South London neighbourhood of Peckham. The show follows a larger than life father struggling to instil his old-fashioned African values in his household. It is a clash of African traditional values versus British culture.

The first season of ‘Meet the Adebanjos’, financed by Osayemi’s friends in the financial sector, has been released on a DVD box set. A few of the episodes is also freely available on the internet as teasers.

The past year has been a busy one for the small team behind ‘Meet the Adebanjos’. Numerous television deals have been signed and the show has also been adapted for the stage. How we made it in Africa caught up with Osayemi to find out how things are going.

When we interviewed you more than a year ago the first episode of ‘Meet the Adebanjos’ just launched on the internet. Give us an overview of the progress that has been made to date.

Tell us more about the stage show

Essentially the same actors from the show perform in theatres to a live audience. We mix the scripts together and make it very entertaining with an interactive aspect and also live music. Our first theatre run was at London’s Catford Broadway Theatre and this was sold out with almost 2,000 people over two days coming to watch the live show.

How successful has the DVD been so far?

The DVD has proved extremely popular in the UK and Europe, but we have been focused more on pushing the show via the TV platform compared to the DVD platform.

Describe some of the greatest challenges you have faced over the past year in trying to make a success of ‘Meet the Adebanjos’.

It is a lot of hard work as we have a small team. So it has been a lot of travelling and striking deals around Africa. We have also had to learn very fast that business is conducted differently depending what country you are in and learning how to adapt to that. At the same time we have been launching our theatre brand and that involves a lot of promoting and marketing work.

What are your plans for ‘Meet the Adebanjos’ over the next year?

To produce 13 episodes for season 2 – there is such a demand for it. Also an international tour of our theatre production – the live show is so entertaining that we want to bring it around the world to all our fans.