Two young entrepreneurial TV producers are following an unconventional route in pursuit of their dream to produce a successful sitcom. 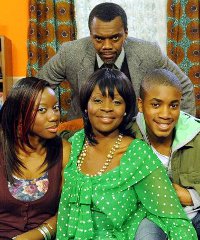 Cast members from "Meet the Adebanjo's".

Meet the Adebanjo’s is a series about the lives of a fictional British-Nigerian family living in the UK. According to the producers, the show “highlights the multi-generational and multi-cultural family dynamics that take place when traditional African parents raise British-born children. These families exist all over the UK, yet remain unrepresented on mainstream television”.

The show has been created by two 26-year-olds – Andrew Osayemi, a former trader, and Debra Odutuyo, an experienced TV producer. They operate as the South London-based MTA Productions.

After years of unsuccessfully pitching the concept to mainstream broadcasters in the UK, Osayemi and Odutuyo decided to raise their own funding and engage the world of the internet and social media.

Osayemi, who for five years worked as a currency trader in London and New York, managed to convince his friends in the financial sector to bankroll the first season. “After countless rejections, I resolved not to give up on my dream by spending the last two years doing everything I possibly could to raise money to film eight episodes. I eventually raised enough money from private investors to produce a broadcast-quality show,” he says.

So without mainstream backing, how will the show make money? “We have a two-fold strategy to generate revenue,” Osayemi tells How we made it in Africa. “We are hoping for the Meet the Adebanjo’s to transcend to the viewers in Africa. A comedy sitcom highlighting Africans living in the diaspora is unique and we are talking to many TV stations across the continent. In the UK and US our model is slightly different. We are currently showing two promotional episodes online and will then later in the year release the full DVD box set.” He says that merchandising and producing a theatre version could provide additional revenue opportunities.

The first episode was launched on the internet at the end of June. With over 9,000 Facebook fans and thousands of YouTube views, Meet the Adebanjo’s certainly seems to be gaining a following.

Osayemi explains that their target audience is “anyone who is a fan of African culture. Obviously Africans home or aboard will be able to relate to a lot of the situations, but it is written in a way which can appeal to a worldwide audience. We want to create a long running sitcom, which will entertain across Africa and also throughout the world.”

It is estimated that the UK has well over 100,000 Nigerian-born residents. A large number of this group lives in the South London neighbourhood of Peckham, sometimes called “Little Lagos” and also where the Adebanjo’s live.

But with Nigeria’s booming economy, are Nigerians living in the UK considering returning? “We respect the entrepreneurial drive that we see in Nigeria,” says Osayemi. “In the UK there are many barriers, but in Nigeria the sky is the limit. Many Nigerians in the UK wish there were the same opportunities for business here as there are in Nigeria and many are planning to move back to Nigeria as they can see the economy is really moving ahead and they want to be part of the growth. The older generation is longing to return home and many are building retirement homes in Nigeria,” he adds.