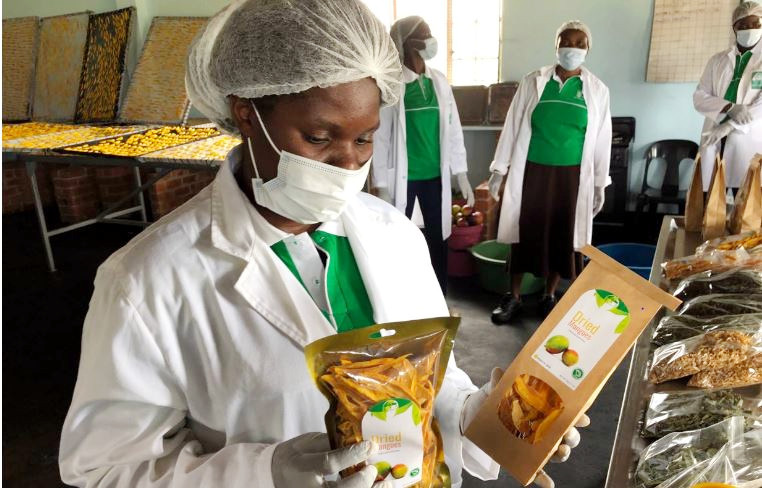 Fortune Mugariri, 24, a worker in a mango processing plant in Gokwe Centre, Zimbabwe, holds some of the plant’s produce.

With heavy rain bringing a glut of fruit, and coronavirus lockdown making selling it difficult, a processing centre is preventing waste and protecting incomes

Before agronomist Peter Sena retired, he planted a variety of mango trees on his rural homestead in Zimbabwe’s Midlands province, aiming to ensure an ongoing income for his family.

This year, an unusually wet rainy season combined with coronavirus restrictions that closed down most of the markets in the country threatened to leave him with a bumper mango harvest – and nobody to sell it to.

But a new dried fruit processing centre, which opened in the nearby town of Gokwe in November last year, means Sena can save his mangoes from spoiling and turn them into a product that can be shipped to buyers around the country and abroad.

“The only market for mangoes was Bulawayo (about 300 km away), so most farmers could not afford to go and sell their mangoes there,” Sena told the Thomson Reuters.

But “with this processing centre, people can (still) get money”, he said, as he examined still-ripening mangoes in his orchard in the village of Ganye, outside Gokwe. 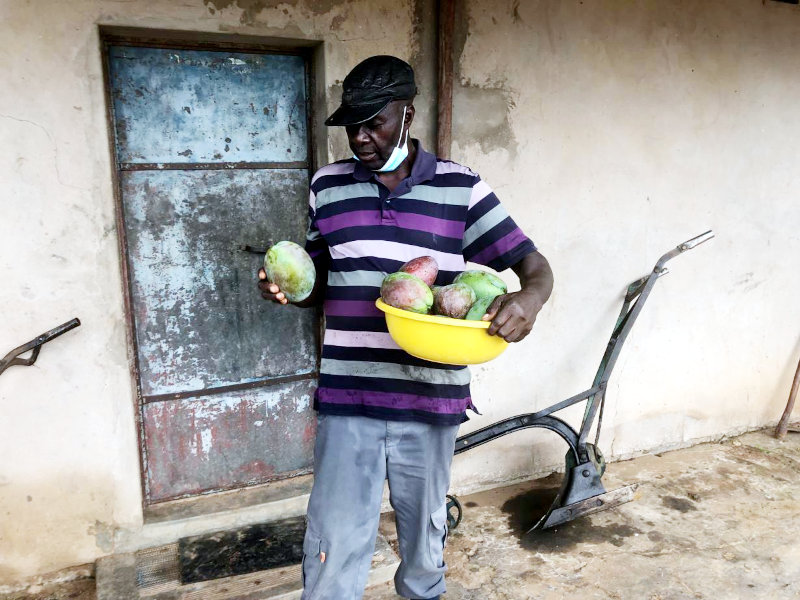 Retired agronomist and mango grower Peter Sena, 75, carries harvested mangoes at his rural homestead in the village of Ganye, near Gokwe Centre, Zimbabwe.

Developed by German aid group Welthungerhilfe (WHH), the processing plant was set up to help mango farmers deal with the glut they sometimes face at the end of each season, said Vernon Mushoriwa, general manager at the Agricultural Business Center (ABC), the social enterprise that runs the plant.

Gokwe South was once known as a cotton-growing region, but over the past decade increasingly erratic weather, low cotton prices and inflation have pushed many farmers to look for alternative fast-growing cash crops, Mushoriwa said.

Mangoes grow well in Zimbabwe’s abundant sunshine and WHH’s research suggested there was demand in the country and abroad for dried mango products, he added.

Run with support from Empretec Zimbabwe, a capacity-building programme of the United Nations’ trade agency UNCTAD, and funding from the European Union, the ABC also processes sunflowers seeds into oil and peanuts into peanut butter.

It serves more than 3,400 farmers around Gokwe South, though Mushoriwa said the aim is to set up more community-based processing centres in other parts of the country over the next few years.

To dry the mangoes, workers lay pieces on racks put outside in the sunshine, under netting to keep the flies away.

Even if clouds slow the drying process and the sliced mangoes start to darken, they still do not go to waste, said supervisor Gardener Gonde.

“We then sell them at a lower price, because they still taste the same,” he said.

“The mangoes ripen at the same time and there is too much – the market is depressed and what else can you do with those mangoes?” he asked.

At harvest time, farmers earn only about $1 for a bucket of fresh mangoes because there is so much of the fruit available, Gonde said.

In comparison, 50 grams of dried mangoes fetches up to four times as much. 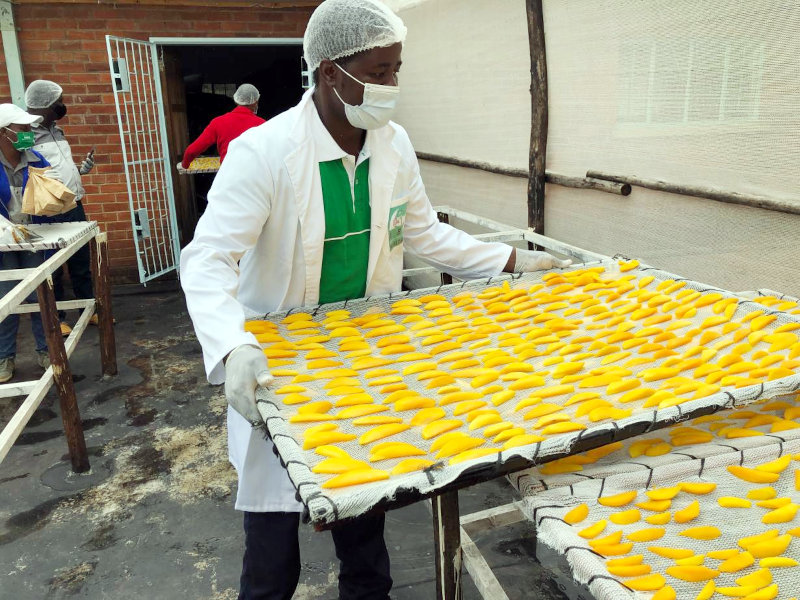 Gardener Gonde, supervisor of a mango processing centre in Gokwe Centre, Zimbabwe, sets processed mangoes on racks to be sun-dried.

Growing mangoes also can help protect farmers against the economic impacts of climate change, as the trees often provide an income even if their other crops are affected by dry spells or flooding, agricultural experts say.

Thomas Heyland, who leads the project at WHH, told the Thomson Reuters Foundation the processing operation is part of a broader initiative to boost agricultural productivity and encourage entrepreneurship among young people in Gokwe.

The ministry “is going full throttle to ensure that we encourage people to do value addition”, she said in a telephone interview.

It also backs efforts to provide additional skills, management training and financial services to entrepreneurs and small businesses, she added.

John Robertson, an economist with the Brenthurst Foundation, a Johannesburg-based development think-tank, said small businesses contribute considerably to Zimbabwe’s economy, though few reliable statistics exist because most of the enterprises are not registered.

“I’m sure at least half the population is able to eat and able to live because of the informal sector or SMEs,” he said. 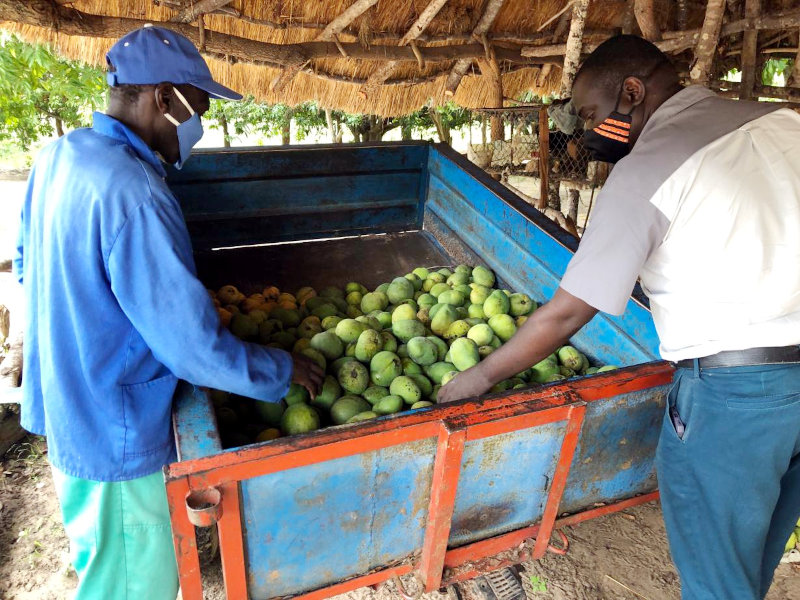 Vernon Mushoriwa (right), the general manager of a mango processing facility in Gokwe, Zimbabwe, examines a harvest brought in by grower Tawanda Chiwaya from the village of Njelele.

“Last year, what we produced all went into the supermarkets and it was not even enough,” he said.

But feeding that demand can be challenging when production relies on the sun as a free, clean source of heat, he added.

“Because of the incessant rains that we have experienced this year, there was no chance for sunshine, which has limited our production a lot,” Mushoriwa said.

The centre plans to start using electrical dehydrators when it is cloudy, he explained, even though that could mean higher production costs.

Sena, the mango farmer from Ganye, said the processing plant has been a life saver this year with coronavirus-linked travel restrictions cutting into his ability to sell his mangoes in markets.

Other growers, he said, “are running at a serious loss, due to a situation which they cannot control. But I’m happy because the (ABC) comes here and buys from me”.