Renaissance Capital is bullish about the future of the beer industry in Zimbabwe, and has advised investors to buy the shares of Delta Corporation, the country’s largest brewer. 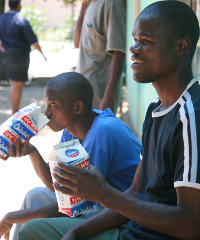 Delta Corporation's Chibuku brand is a traditional sorghum beer. It is commonly referred to as 'shake shake' because of its propensity to settle into its liquid and solid fractions. Shaking restores the beverage to its former grainy off-yogurt consistency.

“Zimbabwe is a beer drinking nation,” noted the investment bank in a recent report.

According to Renaissance, Zimbabweans currently consume an average of 14 litres of beer per person a year. This is more than the Sub-Saharan Africa average of 10 litres, but “well below what we view as its potential level”.

Renaissance expects that economic growth as well as improved affordability, branding, marketing and distribution will boost the demand for beverages in Zimbabwe.

Delta is benefiting from the dollarisation of the Zimbabwean economy. “In 2010, the first full year in a dollarised environment, volume growth was 100%. Dollarisation also catalysed recovery in disposable incomes and this growth sustained the upward trend in demand,” notes the report.

Compared to many other African countries, Zimbabwe’s informal sector for alcohol is relatively small. According to the World Health Organisation, 68% of alcohol consumption in Zimbabwe is not classified as commercial beer, wine or spirits. Therefore it most likely comprises home-brewed beer. This figure is relatively low compared with other countries such as Nigeria (94%) and Tanzania (86%). Renaissance says this can be explained by the availability of low-cost brands such as Chibuku and Eagle.

“Informal markets for traditional beer used to be more sizeable in farming and mining areas (where mines operated their own beer halls), but the collapse of commercial agriculture together with the decline in mining activity saw most of this fall away. We expect that some of the informal has moved to commercial sorghum beer or cheap lagers,” explains the report.

Renaissance says it expects higher consumer spending as the country emerges from a decade of economic decline. “We have already witnessed increased spend following recovery in small-scale farming (cotton and tobacco) and some mining. We expect firm prices for cash crops and minerals will continue to encourage production, resulting in increased spend in farming and mining areas.”