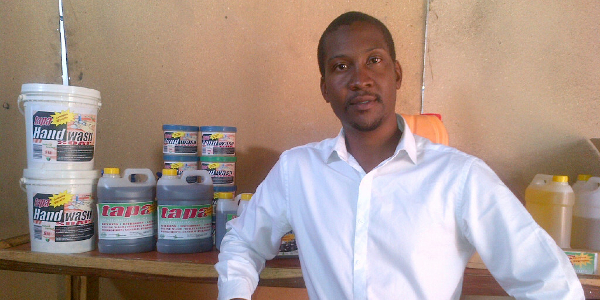 Mutoba Ngoma is the entrepreneur behind Tapera Industries, a company that produces biodiesel and organic soap in Zambia.

Soon after Mutoba Ngoma finished studying aeronautical engineering in the UK, he decided to return to his home country Zambia to start manufacturing biodiesel in his backyard. Almost 10 years later his company, Tapera Industries, has grown into a diversified eco-friendly business supplying biofuel and organic soap. And last year Ngoma was named a Mandela Washington Fellow.

But why did a young aeronautical engineer decide to return to Zambia to try his hand at entrepreneurship and biodiesel production?

His decision was based on the need to earn a sustainable income, along with his desire to do work “that really matters”. He had been struggling to find a job in the UK in his highly competitive field when he came across a documentary on Brazil’s renewable energy advances, particularly in biofuel.

“I realised that if I did something the world needs, I’d put myself in a stable financial position,” he explained to How we made it in Africa.

And considering Zambia’s fuel shortages, Ngoma started wondering why there was no local production of biofuel as both a cheaper and more sustainable option.

Towards the end of 2006 he returned to Zambia, and immediately began using the internet to learn how to produce biodiesel. He bought his main raw material – vegetable oil waste – from local restaurants and hotels in Lusaka and by December had produced his first batch of biodiesel in his backyard.

“The first person to test it was my friend,” recalled Ngoma. “He had just come back from studying in Australia, and we tested it in his car. It worked, and we were so excited.”

The biofuel could be used in any diesel engine, and was cheaper than regular diesel sold in the market.

However, to scale the business, Ngoma needed capital. With little savings, he found employment as an aircraft technician at Zambian Airways, where he used his earnings to produce enough biodiesel to supply colleagues and friends. And when the airline went under in 2009, he focused all his energy in scaling-up operations.

“During the time I was employed I had made quite a few contacts in the renewable energy industry in Zambia. So when I restarted properly in 2009, it was easy for me to reach out to those contacts.”

Then one of his colleagues, who was operating a public bus service, decided to test the biodiesel.

“I was asked to deliver some to one of his drivers, who tried it and liked it. And that’s how I entered into the public service vehicle market – supplying bus drivers. It was my break into the mass market.”

A change in the business model

In 2011 a new government came in, and with that new reforms around business registration. This included a change in licensing laws for street hawkers, which made it easier for them to conduct business. The result was many informal traders started buying the used cooking oil from restaurants to supply low-income households. As demand rose, so did the cost. Supply also became limited, to the point that the used oil stopped being a viable raw material for Ngoma’s biofuel.

“So that is the point we started looking for alternative uses for the used oil, because we had a limited oil supply. We looked into the best way to use it.”

The company started to focus on soap production, which Ngoma said turned out to be much more lucrative than his biodiesel business – despite competitors in the market. Production includes a liquid shampoo, a hand wash for industrial workers, and a laundry bar which is sold to traders in the informal and semi-informal mass market.

According to Ngoma, competition is mostly made up of soap imports, and the company’s lower local production costs means products can compete on price.

Tapera Industries still produces biodiesel for a handful of clients – around 7,000 litres, depending on raw material supply. However, it has also started supplying a raw material – produced from jatropha seeds which can be used instead of used cooking oil – to other companies in the region looking to produce their own bio-diesel.

The business sources the jatropha seeds from local farmers and, during harvest season, aggregates around 50 tonnes of the raw material for biofuel production, which mostly supplies Bio Energy Resources Limited in Malawi and Copperbelt Energy Corporation in Zambia.

Ngoma said he is still defining Tapera’s business model, but plans to expand its outgrower scheme to grow both the biodiesel and soap production businesses. He also wants to start cultivating castor beans to produce castor oil for biodiesel production.

Cheap knock-offs of biodiesel in the sub-Saharan market have meant that Ngoma has had to spend time educating clients and developing trust in his product. But despite challenges, he wants other entrepreneurs in Africa to know that there are considerable profits to be found in biofuel production.

“However, anyone who wants to do something like this needs to do a lot of research,” he highlighted.

“And for me the biggest business lesson I have learnt so far is the strength of networking and collaboration. Without working with other people in the industry, things would have taken much longer to get off the ground.”