CEOs are gradually recognising the untapped opportunities in sub-Saharan Africa. But which African cities will offer the best business potential in the coming years? 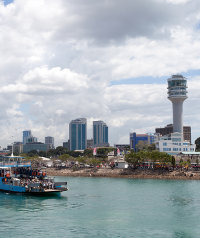 By 2030 Tanzania’s commercial hub Dar es Salaam could have a bigger population than London has now.

A recent note by professional services firm PwC suggests the most lucrative opportunities might not be in the region’s three largest cities – Lagos (Nigeria), Kinshasa (Democratic Republic of Congo) and Johannesburg (South Africa).

The collective population of the ‘next 10’ is expected to double by 2030, adding more than 30m people. According to United Nations projections, Dar es Salaam and Luanda could have bigger populations than London has now.

Bigger cities also lead to bigger economic opportunities, according to PwC. The ‘next 10’ cities are expected to triple their economic output by 2030. More specifically, economic activity in these cities is estimated to increase by about US$140bn, roughly equivalent to the GDP of Bangladesh.

However, there are hurdles that could stand in the way of the ‘next 10’ reaching their full potential, notably poor transport infrastructure and inadequate education systems. The inability of regulators to effectively manage economic growth could also lead to problems such as credit or property bubbles.