“When people at all times have physical, social and economic access to sufficient and nutritious food that meets their dietary needs for a healthy and active life.”

This is the definition of ‘food security’. Unfortunately this scenario is not a reality in most countries in sub-Saharan Africa. The Global Food Security Index 2012, produced by the Economist Intelligence Unit (EIU), recently highlighted the state of food security across 105 countries. Here is what the report had to say about sub-Saharan Africa: 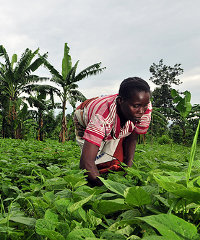 A farmer in the DRC, which has been ranked as the world's most food insecure country.

Despite sub-Saharan Africa’s immense agricultural potential, the region performs relatively poorly in the rankings. From the 28 countries in the region included in the index, only South Africa (40th), Botswana (47th) and Ghana (68th) don’t feature in the bottom third of the rankings.

“Sub-Saharan African countries are the most food insecure. Burundi, Chad and the Democratic Republic of Congo (DRC) take the bottom three spots. Each of these countries has done little to enable food security; they do not even have enough food available to meet the daily caloric needs for everyone in the country. In the DRC, the national supply amounts to 1,605 calories per person per day – 43% below the recommended level for adults,” notes the report.

Despite sub-Saharan Africa’s dire situation, the coming years could see an improvement in some of the countries. “Several of the sub-Saharan African countries that finished in the bottom third of the index, including Mozambique, Ethiopia, Rwanda and Niger, will be among the world’s faster growing economies during the next two years. Although still poor in absolute terms, rising incomes suggest that these countries may be in a position to address food insecurity more forcefully in coming years.”

To produce the index, the EIU assessed food security across three dimensions: affordability, availability, and quality and safety.

This category measures the ability of consumers to purchase food; their vulnerability to price shocks; and the presence of programmes and policies to support them when shocks occur.

The EIU notes that those living in sub-Saharan Africa and South Asia are the most vulnerable to high food prices. “Of the 28 sub-Saharan African countries covered in the index, food consumption accounts for 50% or more of household spending in 20 of them.” In Switzerland, New Zealand, and the US, only around 10% of spending goes to food. This means that people in these countries can easily divert a percentage of non-food spending to food, if high prices force them to do so.

However, low food prices can also have a negative impact on food security – especially in low-income regions such as Africa with many small-scale farmers. “Low prices depress smallholder farmers’ incomes and disrupt their ability to purchase food. Low prices are also a disincentive to produce, which can hurt crop output in subsequent years,” says the report.

The EIU suggests that policymakers can assist farmers with price-related risks by ensuring access to finance. Sub-Saharan African countries currently perform particularly poor in this area. “Financing for smallholders can help them invest in productivity-enhancing equipment so they can quickly adjust to low food prices by increasing production.”

The ‘availability’ category measures the sufficiency of the national food supply; the risk of supply disruption; national capacity to distribute food; and research efforts to boost agricultural output.

In Austria, the availability of food is the highest – 3,819 calories per day. According to the Food and Agriculture Organisation (FAO) the average adult needs 2,300 calories per day. Sub-Saharan Africa is the only region in the world where average food supply is below the daily adult requirement, with the worst performers being the DRC (105), Burundi (104), Zambia (102) and Angola (101).

Sub-Saharan Africa is one of the regions most dependent on chronic food aid – which is seen as evidence of fundamental weaknesses and policy failures in food supply.

Investment in agricultural technology is one of the mechanisms that can help farmers increase crop yields and reduce vulnerability to climate change.

In addition to greater productivity, farmers also need access to markets to sell their produce. With the region’s poor infrastructure, access to markets has traditionally been a significant challenge to Africa’s smallholder farmers. “Food experts often note that smallholders could contribute significantly to global food supply if they have access to larger markets,” says the report.

“Poor nutrition is a concern for wealthy and poor countries alike. Nutrition, not included in earlier definitions of food security, is now widely recognised as important, particularly in the 1,000 days between the start of a woman’s pregnancy and her child’s second birthday,” says the EIU. Obesity is also becoming recognised as a form of malnutrition.

Vitamin A and iron are the micronutrients often found lacking in diets.

To measure food safety, the EIU considered the presence of regulated food markets, the existence of a government entity to regulate such markets, and accessibility of drinkable water. Sub-Saharan Africa is, by far, the worst of any region in food safety, scoring 33 points less than the next region above it. “In sub-Saharan Africa, for example, the presence of aflatoxins – a carcinogenic toxin produced by mould – in maize and peanuts has made food safety a particular issue,” says the report.