Ahead of the proposed start of oil production next year, Ugandans have mixed feelings about how crude will impact their lives. 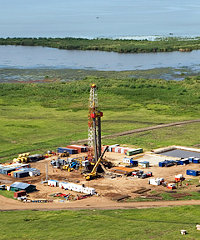 “Some people are indifferent while others are excited because investors will bring employment opportunities and popularity to a country that is better known for war and Idi Amin by the rest of the world,” says Hadijah Nannyomo, tax manager at Ernst & Young Uganda.

Responding in her personal capacity to questions from How we made it in Africa, Nannyomo says that many Ugandans don’t expect any direct benefits from oil production because of high corruption in government.

Uganda is pinning a lot of hope on the domino effect to other parts of the economy that the discovery of oil could have. The major player in Uganda’s oil sector, Tullow Oil, says Uganda has 2.5 billion barrels of commercially viable oil. Tullow’s Uganda manager, Brian Glover, says production will start in 2012, although some stakeholders see this as an unrealistic date.

Apart from oil production, greater integration between East African Community (EAC) member states (Kenya, Tanzania, Uganda, Burundi, Rwanda) could also have a positive impact on business in Uganda. The EAC last year launched a common market and is targeting 2012 for adopting a single currency. “What regional integration is successful in doing is enlarging the size of the domestic market, and making it more attractive for trade and investment in those countries,” says Yvette Babb, an analyst at Standard Bank.

Nannyomo notes that Uganda’s business environment has improved in recent years. “Doing business is more liberal and investing in the country is easier.”

She also says that common fears about investing or doing business in Uganda are largely unfounded. According to her, common misconceptions are that Uganda is insecure and that starting up a business, or maintaining one, is close to impossible due to high taxes and bribery. “All those are myths. Foreign businesses will succeed in Uganda if they do prior research about the country and budget for costs and available incentives,” Nannyomo added.