Ceramic Industries, the South Africa-based manufacturer of tiles and sanitaryware, expects exports to the rest of Africa to play an increasingly bigger part in the business going forward. 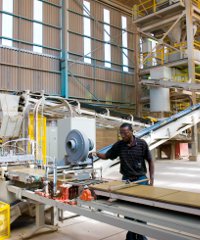 CEO Nick Booth told How we made it in Africa that the company is also considering to establish a factory in another African country within the next two to three years.

The firm currently exports around 15% of tile production and 20% of sanitaryware production to other African countries such as Namibia, Botswana, Zimbabwe, Mozambique, Zambia, Malawi, Tanzania and the eastern DRC.

The JSE-listed company today released its results for the year ended 31 July 2010.

Market conditions in the tile and sanitaryware segments of the building industry remained depressed during the year. Whilst a marginal improvement in the renovations market was evident in the latter months of the period, positively impacting tile sales, the sanitaryware market continued to be adversely affected as a result of the decline in new build projects in the private and government sectors.

Booth said he expects the current market conditions to continue over the next year. “We don’t see any signs of any upturn until the third quarter of the next calendar year. So we’re talking probably September/October next year before we will see any kind of turnaround,” he said.

Commenting on the effect of the World Cup on Ceramic Industries’ business, Booth said the firm saw a boost in sales towards the end of May before the event, followed by five weeks of very low sales during the tournament, and a pick-up afterwards as stores restocked.