My recent visit to Lagos has changed my perception of Nigeria’s commercial capital. I can see that the Lagos State government is putting a great emphasis on improving the quality of life of Lagosians. The city is now relatively peaceful and green, while the traffic police tries to turn chaos into order. Efforts to clean up the city are noticeable. 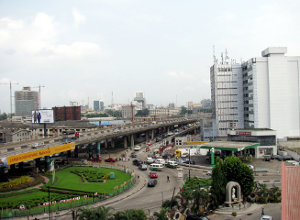 During my research trips to other African countries, I spent a lot of time stuck in traffic. While Lagos used to be no different, I was surprised how easy it was to move through its streets this time round. I may have been lucky, or perhaps scheduled my meetings countercyclical to rush hour, but overall, even when I was stuck in the car, it generally never took very long to get out of it. This contrasted with my recent experiences in Nairobi, where I once spent seven hours stuck in traffic versus four hours in meetings one day.

The reason why Lagos’ traffic has improved is down to the uncompromising stance of the government. First, it banned local motorcycles, the okada, that were creating havoc on the streets. The city’s traffic police is also omnipresent. On the one hand, the police is known for wanting to make a quick buck, particularly ahead of weekends, by stopping drivers and fining them for no particular reason such as for not having a fire extinguisher in the car. This is such a frequent occurrence that Nigerian pop star Wizkid dedicated an entire song to it called ‘Pullover.’

On the other hand, the police’s very presence has improved the city’s problem with traffic noticeably. One hardly sees motorists using their mobile phone while driving. Traffic generally seems more orderly.

In Nairobi, the sense of insecurity is palpable. It’s not just the terrorist threat that limits people’s freedom, but also crime. While I was advised to keep my phone and belongings out of sight when driving and walking through the streets of Nairobi, in Lagos I felt perfectly at ease showcasing my various phones as most Nigerians do.

Although Nigeria has a reputation for being unsafe, I generally felt welcome and unthreatened; I was never hassled. This sentiment was echoed by another young white female businesswoman I met, who had been working and living in Lagos for the past two years.

In many parts of the city, one now sees notice boards advising people to keep the city clean. The roads are lined with flowers, trees, and many vendors selling plants. The government also introduced a cleaning curfew called ‘sanitation day’. On one Saturday each month, no one is allowed to leave their house before 10am because they are expected to clean up and make order. “An expat friend of mine once left his flat during sanitation day hours and the police stopped him and ordered him to go back home and clean”, a European diplomat tells me.

However, the Lagos government’s efforts do not yet extend to all parts of the city. Slums such as the infamous Makoko still abound. Made up of an estimated 150,000 people originating from neighbouring Benin and Togo, the slum is built on water and lacks basic services such as education, sanitation and healthcare. Many Lagosians are keen to have it removed.

However, to the western eye, the water slum, fondly dubbed ‘Venice of Africa’ is both aesthetically curious and in its own particularly way, beautiful. It reminds the beholder of Rio de Janeiro’s favelas, but instead of stretching over rolling hills, it floats graciously on water; the narrow alleyways of the favela, replaced with small canals dotted with wooden canoes.

Transforming Lagos into a tourist destination?

The Lagos State government could learn several lessons from the way Rio has dealt with its slums. Several painting projects have first and foremost transformed the look of some of Rio’s favelas. They have also strengthened houses through plastering, provided employment and training to the local community engaged in the renovation projects, and most importantly, turned favelas into attractive spots for tourism. Every day, travellers from around the world now walk through the once notoriously dangerous favelas, such as Rocinha, and even sleep in local accommodations. Land prices have skyrocketed, transforming a former no-go area into a major economic force that benefits Rio and the local community.

The Lagos State government should include Makoko in its efforts to make Lagos a more pleasant place to live in. It could regenerate an area by transforming it into a major tourist attraction by following Rio’s example.

The public and private sectors must join forces

Lagos’ ongoing improvements provide plenty of opportunities for the private sector. Companies should closely work with the Lagos State government to improve road safety and infrastructure, and improve access to public sanitation, water and electricity. Only a combined effort between the public and the private sector will make the whole of Lagos a pleasant place to live in, where the business traveller will want to extend a visit, rather than fly off to Ghana’s beach resorts at the first opportunity.