So you’ve decided to take the plunge and expand your business into Africa. Great. But the continent is not one homogeneous market and comprises 54 countries, each with its own unique dynamics. Which countries are the most attractive? 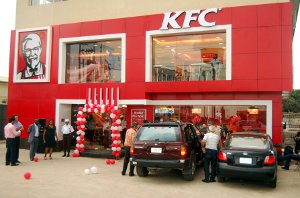 A KFC outlet in Ibadan, Nigeria. The West African country has been ranked as the market with the most favourable macroeconomic backdrop for consumption growth.

The increasing spending power of African consumers has been covered extensively by How we made it in Africa. Rising incomes has attracted investment from many consumer-facing multinationals such as supermarket chains and mobile phone operators.

By combining these variables into a single measure, RMB has created a ranking index of the countries with the best outlook for consumer goods. “This index provides us with a gauge of which countries rank the highest when all four measures are taken into account. Nigeria, Ethiopia, the Democratic Republic of Congo, Kenya and Tanzania have the most favourable macroeconomic backdrops for consumption growth.”


The report notes that although Africa is an important market for consumer goods from a macroeconomic perspective, companies need to remember that each country is different. “Ethiopia, for instance, has a large population and a decent market size, but it would probably not offer a concentration of high-income earners for high-end retailers.”

RMB says there are many other aspects to consider when assessing where the most attractive consumer environments are in Africa. They can include the following:

There has recently been various media reports about the growth opportunities that Africa offers. For example, Whitey Basson, CEO of pan-African supermarket chain Shoprite, has been quoted saying that he sees potential for 700 stores in Nigeria. At a conference earlier this year, Mark Turner, Africa director at Massdiscounters, a division of South African-based retailer Massmart, said that it often takes a while for the opportunity that Africa offers to reflect on a company’s bottom line.

Massmart, a subsidiary of Walmart, has been doing business in the rest of the continent for around 15 years. The company has a presence in 12 African countries outside South Africa.

“The Board needs to be careful not to base their decisions on what they see on the TV and media. You hear everybody talking about this massive opportunity in Nigeria … and I happen to agree with that. You heard Whitey Basson say … that they see 700 stores in Nigeria. The truth is that both of us (Massmart and Shoprite) are probably not getting the returns we should be in that risky market … it takes patience and you can’t just go with what the news is saying,” Turner explained.