Marek Zmyslowski, managing director of Jovago – a popular online hotel booking site in Africa – believes some of his biggest successes have been a result of taking chances. And leaving his home country Poland to move to Lagos to start an online company is no exception. 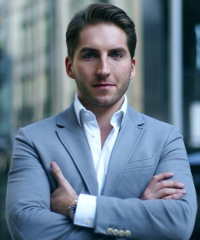 “At that time my knowledge about Nigeria was the so-called Google knowledge. So I knew what Boko Haram was and 419,” says Marek Zmyslowski.

It all started when he decided earlier in his career that he wanted to be an entrepreneur. Speaking at a recent TEDxIfe event in Nigeria, he admitted his first attempt was a complete flop.

“Whenever an entrepreneur hopes to start an idea, he thinks about solving his own problems. That’s mainly how it works. So I built a dating website. And in six months I had failed tremendously, in a spectacular way.”

However, despite the failure, he realised he still wanted to be an entrepreneur in the online space. And although he was broke, he decided not to give up and started searching for investors for his next big idea.

“I remember it clearly like it was yesterday. I was going to a conference hoping to pitch my idea and didn’t have money for my train ticket. I was actually sitting in the toilet of the train, because I was hiding from the guy who was checking to see if you have your ticket or not,” he highlighted during his speech.

Fortunately, his pitch caught the attention of a venture capitalist, and within two years they successfully managed to build and exit two online businesses.

From Warsaw to Lagos

But Zmyslowski had his eye on the US, admitting he had been drawn in by the depiction of the American dream in Hollywood films and MTV videos. However, before he made the move he was approached by the founders of Africa Internet Group’s online shopping site Jumia, who told him what they were doing in Africa. He was invited to Nigeria to set up an online travel website.

Zmyslowski admitted he knew very little about Nigeria prior to this. “At that time my knowledge about Nigeria was the so-called Google knowledge. So I knew what Boko Haram was and 419.”

He managed to find a Nigerian restaurant in Warsaw, run by a Nigerian, who told him a bit more about the country. The result: he decided to take the plunge.

“After a couple of weeks, I landed in Lagos, not knowing anything about building businesses in Nigeria but having one goal: I want to build the biggest online travel agency in Africa in the next few years. And it took me some time and some pain to understand what it really means to build businesses here.”

For example, he learnt the hard way that being told “I’m coming now” could mean waiting five hours for someone to show up for a meeting. He also struggled getting hotel owners to trust his online marketplace in a country where people are wary of online scams.

Yet, today Jovago.com is a popular online hotel booking platform, with over 15,000 hotels listed across the continent and more than 200,000 worldwide. The company now has offices in Nigeria, Kenya, Senegal and Pakistan.

Zmyslowski, who now calls Nigeria home, said opportunities on the continent are far-greater than elsewhere, especially when it comes to inspiring change.

“And what I really believe is that this is the time for young Africans and other people to do something in Africa. Not only can you make money building businesses, but you actually have the ability to change your community, society and environment in a much bigger way than in Europe right now.”

According to Zmyslowski, taking risks, even when they lead to failure, is essential on the path to entrepreneurial success.

However, he said the most important thing is entrepreneurs must learn to trust themselves. And he emphasised there is a difference between trusting in yourself and believing in yourself.

“When I came to Nigeria I trusted in myself because trust comes from experience and I have failed many times. But I always know how to get up. Believing in yourself means you are just young and optimistic. Trust comes with time,” he continued.

“So I encourage you to move on, and let’s break some branches together.”