“Lagos is a difficult place to do business. There’s the high cost of rent and poor infrastructure – unreliable electricity and unreliable internet connectivity are some of the major issues affecting modern businesses in Lagos today. And, with that, there are still a lot of people going into entrepreneurship because of the high rate of unemployment. There is clearly the need for an easier and more affordable way to do business.” 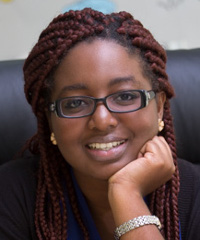 This is why Modupe Macaulay believes there are opportunities for co-working spaces in Nigeria’s commercial hub, and towards the end of last year she officially opened one, CapitalSquare. She had been inspired by the concept a few years earlier when she discovered that one of her heroes, Maria Popova, a writer living in New York and founder of the blog Brain Pickings, had used a co-working space.

“It just seemed like an amazing idea to me; the ability to share a workspace with people doing interesting and not necessarily related things. There would be so many opportunities to learn, to work together, to come up with new ideas, to start great things… At that point, it was the community aspect that caught my attention, and I thought it would be great to have something like that in Lagos,” Macaulay told How we made it in Africa. “So I wrote it down as something I’d like to do someday and forgot about it.”

When Macaulay returned to Lagos after finishing her master’s in the UK in September 2012, she struggled to find a job, and by 2013 she was still unemployed. At that time she was looking to start a business with a friend and needed an affordable and professional place from which to work, which was also hard to come by. Macaulay saw the potential for a shared working space in Lagos, and so the idea for CapitalSquare was born.

It’s all about flexibility

Before coming up with the membership model for CapitalSquare, Macaulay did a lot of research on co-working spaces around the world and realised the membership options needed to be flexible in order to succeed.

Today, CapitalSquare has four membership levels that address the needs of those who have a day job and need another place to work part-time or on weekends, to those who need to use the space full-time. The fees range from US$87-$202 a month and include unlimited high speed internet, uninterrupted power supply and extras like printing, meeting rooms, mail handling, virtual phone numbers, office supplies and tea and coffee.

There is also a $7 full day pass, and a virtual membership option where members don’t physically use the space but can make use of a business address, virtual phone number and mail handling.

According to Macaulay, sharing office infrastructure is not only cheaper for entrepreneurs, but also means they spend less time paying electricity and other administrative bills, and more time on developing their businesses.

“Another huge plus, which really appeals to me, is the free networking opportunity that the entrepreneur gets from working alongside other entrepreneurs,” she continued. “Co-working spaces are a breeding ground for innovation, simply because they are full of people with ideas, who are crazy enough to try to make them happen.”

The pros and cons of being an entrepreneur

Macaulay was able to get most of the startup capital for CapitalSquare from her family after much time studying the market and running the numbers.

“You have to prove that your idea will work because nobody, not even family, wants to put their hard-earned money into something that isn’t worth it.”

She added that the best part of being an entrepreneur is having control over her life, despite the fact that all hours are office hours for the self-employed. However, Macaulay noted that the negative side is not having a regular, guilt-free paycheck.

“I say ‘guilt-free’ because it’s hard not to feel guilty when you’re paying yourself and the business is having a bad month. And yes, you do have to pay yourself (even if it’s something small), especially if you don’t have a day job.”