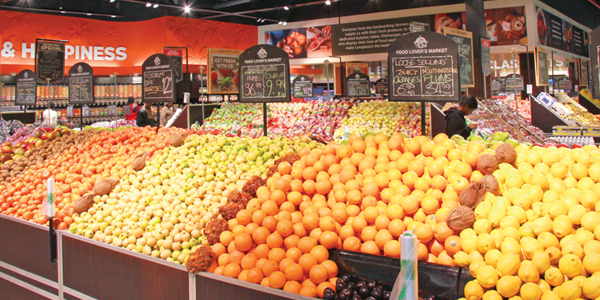 South African-based grocer Fruit & Veg City is planning on setting up a wholesale centre at Kasumbalesa, the border town between the DRC and Zambia, according to the retailer’s head of African operations, Frans van der Colff.

“I have stood at that border and [watched] trucks arrive and stand there, and they are emptied – they sell everything on the truck before they even cross the border. And people don’t come through the border post, they just run through the bush on the side, buy… and then simply run back and sell on the other side.”

The road from Kasumbalesa leads to Lubumbashi, the DRC’s second largest city, and Van der Colff said the route is “phenomenally busy”.

“Almost everything in the DRC is brought in. So the thinking is one sets up a more wholesale type operation – like a Fruit & Veg City ‘Makro’ (South African wholesaler)  – where people can buy in bulk whatever they want for their smaller shops on the other side.”

While Fruit & Veg City has been considering the wholesale outlet for a while now, Van der Colff said it might only be realised in the near future as the retailer consolidates its Zambian operations.

“We had to change franchisees in Zambia, so they are still finding their feet. I would have liked to have done it already, but it will probably only now happen in a year or two,” he estimates.

“But I do think it is a lovely business model, and in that area specifically it will work very well.”

The planned wholesale operation at the border post in Kasumbalesa would be different to Fruit & Veg City’s operations across the rest of the continent. Outside of South Africa, the retailer has operations in 12 countries through its Food Lover’s Market brand. Most of these countries have only one or two stores as the company establishes its supply chain networks to support further expansion.

“We only have one in Luanda with plans to do another two now shortly. So there are all sorts of [plans], but it is about establishing a base in a country first and then growing from there… It doesn’t all happen overnight. It is difficult to find sites, and then there are logistics issues and finding the right partners.”

Sourcing local produce can also be difficult. In Zambia, Van der Colff estimates around 50% of vegetables are sourced locally, while other markets are more challenging and require much more imports from South Africa, which are subject to transport costs and duties.

For example, the retailer struggles to source lettuce in Ghana. “And if you do source it, you will probably pay R100 (about $7) for the lettuce,” he highlighted.

However, the retailer is working with local farmers in their African markets – including a lettuce farmer in Ghana – to help improve supply.

“We’ve got everything. We’ve got the space, the ground, the fertile soil, the people, and there is water in most instances. It is just literally about supplying the seeds.”