For Kader Coulibaly, general manager at DHL Express in Ghana, the best thing about living in the country is the friendliness of the people. Coulibaly, who is Ivorian by nationality, however, wishes he could speak and understand some of Ghana’s local languages, which is often used in business conversations. Coulibaly believes that foreign investors should take the Ghanaian market seriously because of the country’s strong economic growth and stable political environment. In an interview with How we made it in Africa, he shares his thoughts on Ghana’s business landscape and what companies need to do to be successful in this market. 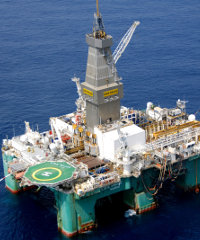 Ghana’s offshore oil industry contributed significantly to the country’s economic growth over the past two years.

1. Prepare for enough initial cash flow: Coulibaly says that because of high interest rates, borrowing money from banks in Ghana is very expensive. It is therefore critical that companies have ample cash flow to keep their businesses going in the early stages. “When starting a business in Ghana, it is important to come with a sufficient cash flow, because one of the issues in the country is bank interest rates, which are above 20%.”

2. Understanding the local market: With an estimated GDP growth of close to 8% in 2012, Ghana has one of the fastest growing economies in the world. However, Coulibaly says that companies shouldn’t expect an easy ride. “The reality can be far different from the expectations.”

He says foreign investors need to do their homework and choose their local partners wisely. “The biggest challenge to doing business in Ghana at the moment is market knowledge. It is also important to choose the right local business partner because the Ghanaian market is a very particular market, and it is better to have somebody that knows the environment very well.”

3. Serving the regional market: While Ghana has a population of around 25 million, Coulibaly says that companies should consider expanding their activities to the neighbouring countries (such Burkina Faso, Benin, Togo and Cote d’Ivoire), which together provide a much larger potential market. “From Ghana you can grow your business throughout West Africa, without any major issues.”

4. Infrastructure struggling under rapid growth: Coulibaly says that Ghana’s business environment is “dynamic but somewhat chaotic” due to the fact that infrastructure – such as energy and water supply – have not kept up with the country’s strong economic growth. “It is sometimes difficult to manage the growth experienced by the country at the moment.”

5. Oil creating opportunities for other industries: Ghana started with offshore oil production in 2011, and the industry has been responsible for much of the country’s rapid economic growth over the past two years.

According to Coulibaly, the oil industry is however creating opportunities for many other products and services, from accommodation to consumer goods. For example in the city of Takoradi – the nearest port to Ghana’s offshore oil fields – there is a need for everything, from supermarkets to hotels. Before the introduction of oil, Takoradi was described as a sleepy town. South Africa’s Protea hotel group recently announced a new hotel in Takoradi, while Renaissance Capital is building a large mixed use development, which will feature shopping facilities as well as residential and commercial components.

Coulibaly says that the downside to the influx of foreign business people into the country is that it has led to a rise in the cost of living, especially related to prices of consumer goods and property.

6. Growth in mining and banking: Despite the rapidly advancing oil industry, Coulibaly says that DHL is currently seeing growth in the mining and banking sectors. Ghana has some of the world’s richest gold deposits.

“We are shipping an increasing number of automotive and machinery spare parts that we can link to the oil industry, but also to mining. A lot of mining projects are starting in Ghana. The banks are also growing and moving into the credit card business, which is creating a lot of activity as far as DHL is concerned,” he explains.