UK-based Lonrho, an Africa-focused investment group, makes about 80% of its profits from countries deemed as high-risk. 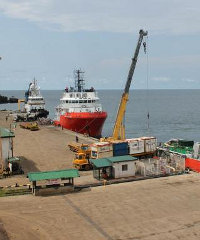 Lonrho manages the Luba Freeport in Equatorial Guinea, a country many investors view as a risky environment.

“I have never sat down and ranked countries according to risk. I have only ever looked for opportunities. Lonrho seeks out opportunities, and manages the risk,” Armstrong said.

“We’ve gone into some very interesting business opportunities in countries that many other people might find challenging… And the way we’ve done that is by the way we mitigate our risk,” he added.

A new report by Ernst & Young has identified countries such as Angola, the Democratic Republic of Congo (DRC), Mozambique, Tanzania, Uganda, Nigeria, Senegal and Ethiopia as countries that present “higher risk” but potentially higher rewards.

Lonrho focuses on providing services to the major industries driving Africa’s economic growth, namely mining, oil & gas and agriculture. The company operates a variety of businesses, including hotels, agricultural equipment and prefabricated housing for the mining industry, to name a few.

Going where others fear to tread

Armstrong used the examples of Equatorial Guinea and the DRC as two perceived high-risk countries where Lonrho has made successful investments. In Equatorial Guinea, Lonrho owns 63% of an oil services terminal called the Luba Freeport, with the other 37% held by the government. According to Armstrong, the port serves about 95% of the area’s oil industry.

Armstrong said the reason why the project works is because of Lonrho’s strong relationship with the national petroleum company and the government. “Political risk always exists, particularly perhaps in a country like Equatorial Guinea, but the way to mitigate that is to take it on head-on, to work with governments and to get to know and understand them.”

Armstrong noted that Lonrho has also diversified its risk in Africa by spreading its operations across 18 countries.

“You always have to expect the unexpected,” he added. “That is where excellent relationships with governments, patience and perseverance, and doing things the right way help you through those difficult risk moments.”