The African home-brew market is highly lucrative. According to Trevor Stirling, drinks analyst at Sanford C Bernstein, it is valued at US$10 billion per annum and comprises a quarter of the beer market. And it is this market that SABMiller, one of the largest brewers in the world, has targeted for many years. 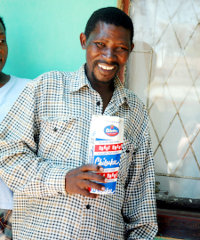 SABMiller has targeted home-brew drinkers with Chibuku beer. It is commonly referred to as 'shake-shake' because of its propensity to settle into its liquid and solid fractions. Shaking restores the beverage to its former grainy off-yogurt consistency.

But the challenge they are facing is that according to their own calculations, “The average African worker must work three hours to earn enough to buy a 500 ml beer; in Europe only 12 minutes of work is required”. So they have to provide cheaper alternatives to home-brews.

Beer drinking is very much part of African culture. Beer is not only imbibed as a beverage, but plays a large role in communal festivities and religious traditions. Home-brewing is the traditional way of producing it and this practice continues today not only in rural areas, but also in townships and informal settlements all over Africa. Home-brewing provides beer that is very cheap since local produce like sorghum or maize is used with an added grain malt to start the fermentation process.

Home-brewing is mostly done by women. Since beer plays such an important role in Africa, the role as brewer gives women a degree of social and economic standing. It is thus understandable that this market is fiercely protected. In South Africa, for the most part of the previous century, the government tried to stop women brewing in townships. Women counteracted by breaking out in violent riots and stormed government beer halls, chased out the customers and destroyed the beer. In 1959 it spiralled out into countrywide demonstrations. These women were fighting for an income and their respect in society.

But home-brewed beer is not always a pretty story…

As early as 1991 studies were published that showed that contaminated grain that is used to make home-brews are associated with severe health risks. Sorghum and maize often are contaminated by mycotoxin molds that have the potential for both acute and chronic health effects via ingestion, skin contact, and inhalation. These effects are compounded by poor nutrition, alcohol abuse and other infectious diseases. Forty-five per cent of home-brewed beers showed the presence of mycotoxins.

How to provide cheaper beer?

To lead the home-brew consumer and also the rising middle class into the formal beer market a gentle approach was required – SABMiller had to provide cheaper beer. Speaking to the spokesman for SABMiller, How we made it in Africa was told the brewer could only do it by engaging local governments and by using local produce.

Costs are reduced by buying the inputs for brewing from local farmers. This leads to the economic empowerment of farmers; from subsistence farming to planting cash crops (maize, sorghum, cassava) that is bought by SABMiller.

SABMiller likes to point out that previously mentioned health risks are a concern and it is assumed that this would have been discussed during negotiations with the relevant governments. By weaning consumers from the unhygienic and often risky home-brews these dangers would be prevented.