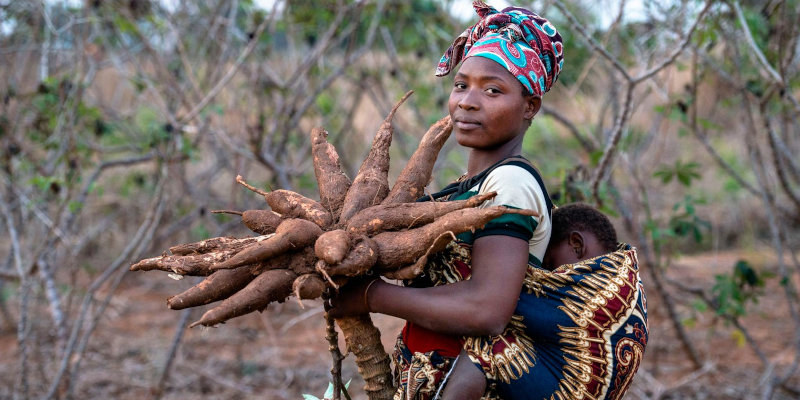 The problem: Cassava, a root crop which looks like a large sweet potato, is one of the most widely grown agricultural commodities in Africa. It is also one of the continent’s least industrialised crops.

The reason for the low levels of cassava processing is because the skin of the root contains cyanide. Once the root has been removed from the ground, it needs to be processed (or at least peeled) within 48 hours, before the skin will start to poison the rest of the crop. Poor transport infrastructure in rural areas makes it difficult to get harvested cassava from small-scale farmers to urban factories within the available time frame. Few people have also invested in countryside factories.

The opportunity: Cassava roots can be processed into a variety of products, including cassava flour, starch, ethanol and glucose syrup. Cassava flour is gluten-free, which opens up opportunities in the health and wellness market.

According to Roland Decorvet, CEO of PhilAfrica Foods, a pan-African food company headquartered in South Africa, cassava processing is one of the biggest opportunities in the continent’s agribusiness industry.

He says Covid-19 has forced food producers to reconsider their supply chains, with a greater focus on local supply. “I will give the example of tapioca, which is a starch extracted from the roots of the cassava plant, and used in some processed meat products. South African meat processing companies import most of their tapioca from Thailand. However, it takes two to three months for the product to arrive from Thailand, which ties up a lot of working capital. A crisis such as Covid can very quickly jeopardise your supply chain if your only supplier is 10,000 kilometres away. PhilAfrica produces tapioca in Mozambique, and we are already seeing a lot of demand for this product from South African food producers. It only takes a day to get the product from Mozambique to South Africa, instead of a month on the ship from Thailand. In a continent such as Africa, where so much is being imported, I believe there is going to be a greater focus on local procurement, processing and supply,” he explains.

Decorvet adds that many African countries are not self-sufficient in terms of starch production, and therefore import maize from places such as the US and Brazil. “That’s crazy because countries in sub-Saharan Africa have enough starch in the form of cassava.”

Who is taking advantage of this opportunity? To overcome the challenges associated with the industrialisation of cassava, a Dutch company called DADTCO has developed a mobile cassava processing facility that can travel directly to where the crop is grown. This mobile mini-factory enables farmers to process fresh cassava on-farm, or nearby, rather than attempting to transport the crop long distances to a central factory. In 2017, PhilAfrica acquired DADTCO and is currently using the technology in Mozambique and Côte d’Ivoire.