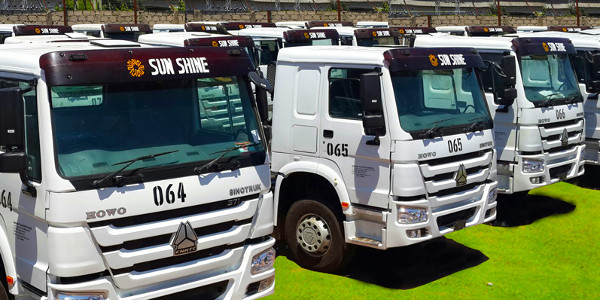 Trucks belonging to China’s Sunshine Group. Founded in Tanzania in 2012, the company initially focused on mining, but has since entered sectors such as agriculture, manufacturing and transport.

Last week, How we made it in Africa published an article shining the spotlight on seven Chinese companies that have found success in the continent. A new report by McKinsey & Company states that there are an estimated 10,000 Chinese-owned businesses in Africa, significantly more than what official figures indicate. Local African companies can either view these Chinese firms as a threat, or an opportunity to forge new business relationships.

One way African companies can benefit from the Chinese presence is by becoming their suppliers. Chinese firms in Africa currently only source 47% of their inputs from local companies. A reason cited for this relatively low number is because African companies don’t meet the price and quality requirements of the Chinese. African organisations need to invest in growing their scale and capabilities. The report suggests that if Chinese firms could source locally at the right price and quality, they would. The problem is therefore not with them, but with local suppliers.