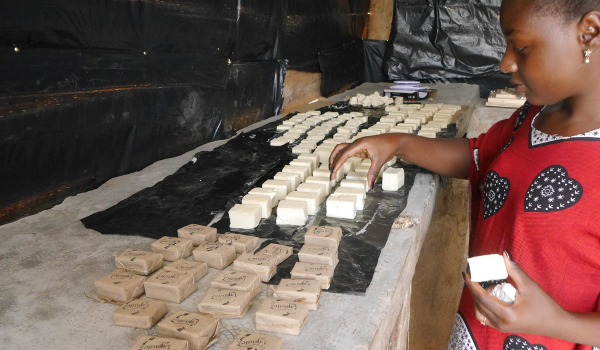 As a young child in Kankobe orphanage in Uganda, Joan Nalubega regularly suffered from bouts of malaria. Now, at the age of 21, she uses that difficult time in her life as her motivation and inspiration for her business: making organic mosquito-repellent soap.

Uganics was established in April 2016 with the aim of finding an intervention against malaria. Nalubega has worked with different chemistry students at Makerere University in Kampala, Uganda, and at Mannheim University in Germany on the product development.

The repellent effects of the soap lasts up to six hours following a bath, and clothes and linen washed with the soap have the same effect.

Finding the right suppliers has been a struggle.

“At first we bought the ingredients from different Ugandan organic farmers, but during our tests, we realised that some ingredients were not purely organic, yet it is one of our values. So, we decided to grow the ingredients ourselves,” Nalubega says.

The company did not have any land for that purpose. They then incorporated an element into their social business model where they look for rural female-led households who would not be able to purchase their product, but who have dormant land available. These mothers are then given seeds to plant the herbs required for the soap production.

“Now, every end of the month, we meet up with them, extract the oils together and provide them with the final product at an affordable price, whilst they also earn a living,” says Nalubega. Currently there are 20 of these rural families contributing as suppliers.

Uganics is a for-profit business, but Nalubega is adamant that there will always be a social impact focus. The company has a two-tier pricing model where the same product is sold at more than 100% profit to the socially and ecologically conscious guests of upmarket lodges and hotels, and then at an affordable, subsidised price, to families in rural communities.

Along with the 20 rural suppliers, Uganics has two employees (illiterate youth) who have been trained in production, and five co-founders who assist Nalubega with the operations. The production facility is currently on land owned by the Social Innovation Academy of Uganda in the Mpigi district.

Along with the consumer business of selling the soap, Uganics also runs awareness campaigns in the country on how to prevent malaria, not only when sleeping with mosquito nets, but throughout the day.

Uganics has two distributors in Kampala with signed agreements, five lodges that already buy the products every month and three other hotels that are interested. To supply the demand, the company will have to expand its equipment to increase production. This is the next step Nalubega and her team are looking at.

Her goals for the future are to create 300 jobs for women in rural communities through herb growing and oil extraction, and to increase the number of youths employed in mosquito repellent production to 50. Uganics also plans to add more products to its line, such as organic lotions and sprays.

In the sprawling capital city of Madagascar, Antananarivo, in a green area in the suburb of Antanetibe Ilafy, is the production facility for BOISSA. This young company was set up earlier this year by the 21-year old Nomena Andrianantoandro, who fiercely believes that her business idea and product comes at exactly the right time to benefit from an increasing focus on healthy living in her native country.

“I am passionate because I have started to discover the power of nature. Because we are what we eat, I realised that natural fruits and veggies can give us a productive body and a peaceful mind,” says the business management student. BOISSA drinks are 100% natural, sugar- and preservative-free fruit and vegetable smoothies – or “cocktails” as Andrianantoandro prefers to call them.

All of the startup capital that was required to set up the small production facility and get the business going, came from Andrianantoandro’s own savings. Currently the beverages (a combination of fruits and vegetables enriched with Malagasy rice milk) are hand pressed, but she hopes to invest in a semi-automated production system by December of this year to boost production capacity.

The idea for the business came from her own experience – she loves fresh, natural fruit and vegetable smoothies, but used to have to travel into the city centre to a juice bar to get her daily fix. So, she envisioned BOISSA – where these healthy drinks could be distributed widely to all the health-conscious customers out there.

“We are currently working with local smallholder farmers to provide us with the ingredients that we need. We value local production, so it is all manufactured here in ‘Tananarive,” she says.

BOISSA is barely six months old, but already it employs six young women. The fledgling company is distributing its products through two channels: B2B, where they provide restaurants and sports academies with the drinks and B2C, where the product is distributed to private clients and companies.

Andrianantoandro admits that it was not easy to find the first stockists for BOISSA. “It was a bit difficult because we had to demonstrate our capacity for production, the potential and the benefits from the product as well. Now, I go out and capitalise on the networks and relationships that I already have in the market,” she says.

It’s early days, but it’s going well. Currently the company is making 15% profit from sales and Andrianantoandro hopes to add a laboratory in the long run in order to get on a par with international standards and achieve export accreditation.