Wind power generation currently plays a negligible role in the energy mix of the 12 countries making up the Southern African Power Pool (SAPP) but the situation is expected to improve slightly over the coming years. 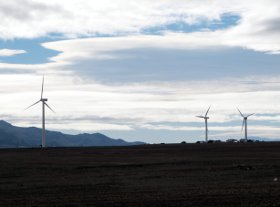 This according to Alison Chikova, chief engineer of the SAPP, during his presentation at the Wind Power Africa conference recently held in Cape Town. (Download the slides of Chikova’s presentation)

Some of the current wind farms in Southern Africa include two facilities in South Africa’s Western Cape Province (Klipheuwel and Darling); various 21 kilowatts wind/solar hybrids in Malawi; and some small facilities in Zimbabwe. A 10 MW pilot project in Chicumbane in Mozambique is also under development.

In addition, Belgian green electricity company, Electrawinds, has begun the construction of a wind turbine in the harbour of Coega, near Port Elizabeth, South Africa. The development is the first phase of a large wind farm that, in time, will comprise 25 wind turbines.

In terms of future capacity building, wind power is expected to play a marginally bigger role.

Of the total new generation projects in the region expected to come on stream in 2011, wind energy comprises 1.5%. This will come entirely from a 25 MW project in the Lesotho highlands.

In 2012, 3.6% of new generation projects will be wind power. These include a 100 MW project from an independent power producer (IPP) in South Africa and a 40 MW IPP project in Luderitz, Namibia.

In 2013, a 40 MW wind project from an IPP in South Africa’s Eastern Cape will make up 1% of the entire new generation capacity expected to come on stream during the year.

Despite the projects that have already been announced, South Africa is promoting 2,500 MW of wind power by 2015.

Compared to other parts of the world, wind energy generation in Southern Africa still has a long way to go. Carlos Gasco, executive committee member of the Global Wind Energy Council (GWEC), during his address at the conference, said that the world’s top five wind energy producers are currently the United States (installed capacity of 35,064 MW), China (25,805 MW), Germany (25,777 MW), Spain (19,149 MW) and India (10,926 MW).

According to Chikova, some of the challenges to the adoption of wind power in the SAPP region include:

The Southern African Development Community (SADC) has set itself a target of generating 20% of the region’s energy needs from renewable sources by 2025.

“The wind energy potential [in the SAPP region] is massive,” Chikova said. He added that a lot can be achieved if governments are serious about what they want and called on wind technology developers to come onboard to reduce carbon emissions and bring about new technologies.