Even though he is the majority shareholder of one of South Africa’s largest unlisted retailers, Braam van Huyssteen still works long hours. I spoke to him on the telephone as he was driving from the rural farming town of Colesberg where he’d been negotiating with a landlord. 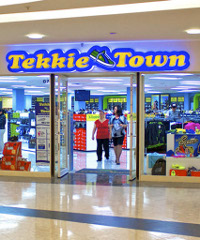 Van Huyssteen is the founder and executive chairman of Tekkie Town, a branded footwear retailer that has grown to over 260 outlets since its launch in 2001. The company mainly caters for value-seeking customers and has built up a strong presence in the rural areas.

In 2011 Van Huyssteen was a category winner in the Ernst & Young World Entrepreneur Awards. This year Tekkie Town was also recognised as one of Africa’s global growth companies by the World Economic Forum.

From a young age Van Huyssteen learnt about retail from his mother who ran a ladies boutique. He cites her as the person who had the biggest impact on his career. “She was on the job every day. She was never off sick. She was always behind the counter or on the floor, working very hard. And she was a great example of somebody with great tenacity.”

After finishing university and completing his military training, Van Huyssteen got involved in a family retail outlet in the coastal town of Mossel Bay. He later opened a second sports store in nearby George.

A pivotal point was when he went to visit a local Caterpillar footwear representative, with the idea of buying about 100 pairs of shoes. However, after seeing the inventory he made an impulsive offer to buy 12,000 pairs, all the stock. At a cost of 1.2m South African rands.

He and his partner managed to quickly shift them, after which they dabbled in footwear wholesale for a while. But Van Huyssteen knew they had to go into the retail business.

In June 2001 the first Tekkie Town (Van Huyssteen’s mother came up with the name) was launched outside Cape Town. From there on the company quickly expanded. The 2008 economic downturn was especially good for Tekkie Town’s expansion as it snapped up empty premises while others panicked.

Emerging markets private equity firm Actis recently invested US$65m for a “significant minority stake” in Tekkie Town. Actis will help drive the company’s expansion into the rest of the continent.

Van Huyssteen attributes his success to plain hard work. “Each and every store that we have, we have to physically go there. I have to walk the streets, I need to understand the town. I must see if the town is viable for a shop.”

He quips that the business never keeps him awake at night “because if you only go to bed at two o’clock and you know you need to get up at six, you make sure you sleep well for those four hours.”

As we end our conversation, Van Huyssteen says he just arrived in the town of Middelburg. The local Tekkie Town branch closes at 17:30 and he is in time to quickly say hello to the staff.